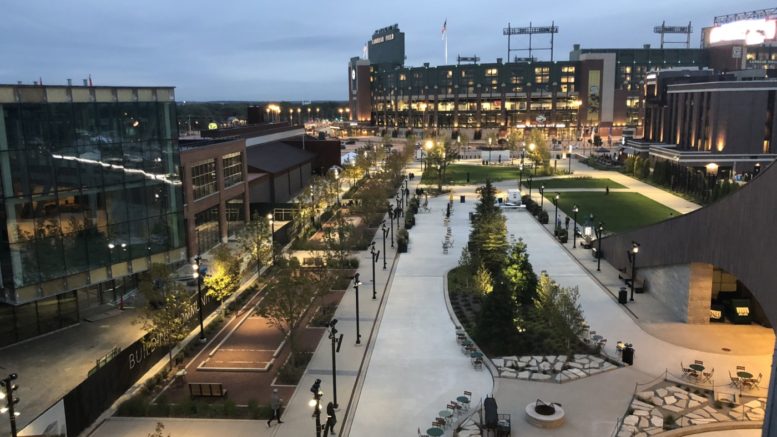 Green Bay can be a fun city for both Packers fans and non-Packers fans alike. The history of the city, as well as the history of the team in a town of barely 100,000, can make a fun weekend to visit. However, in the last few years, the Green Bay Packers have gone above and beyond to create a new area called Titletown, and it is pretty amazing. Here are our favorite things at Titletown in Green Bay, Wisconsin. 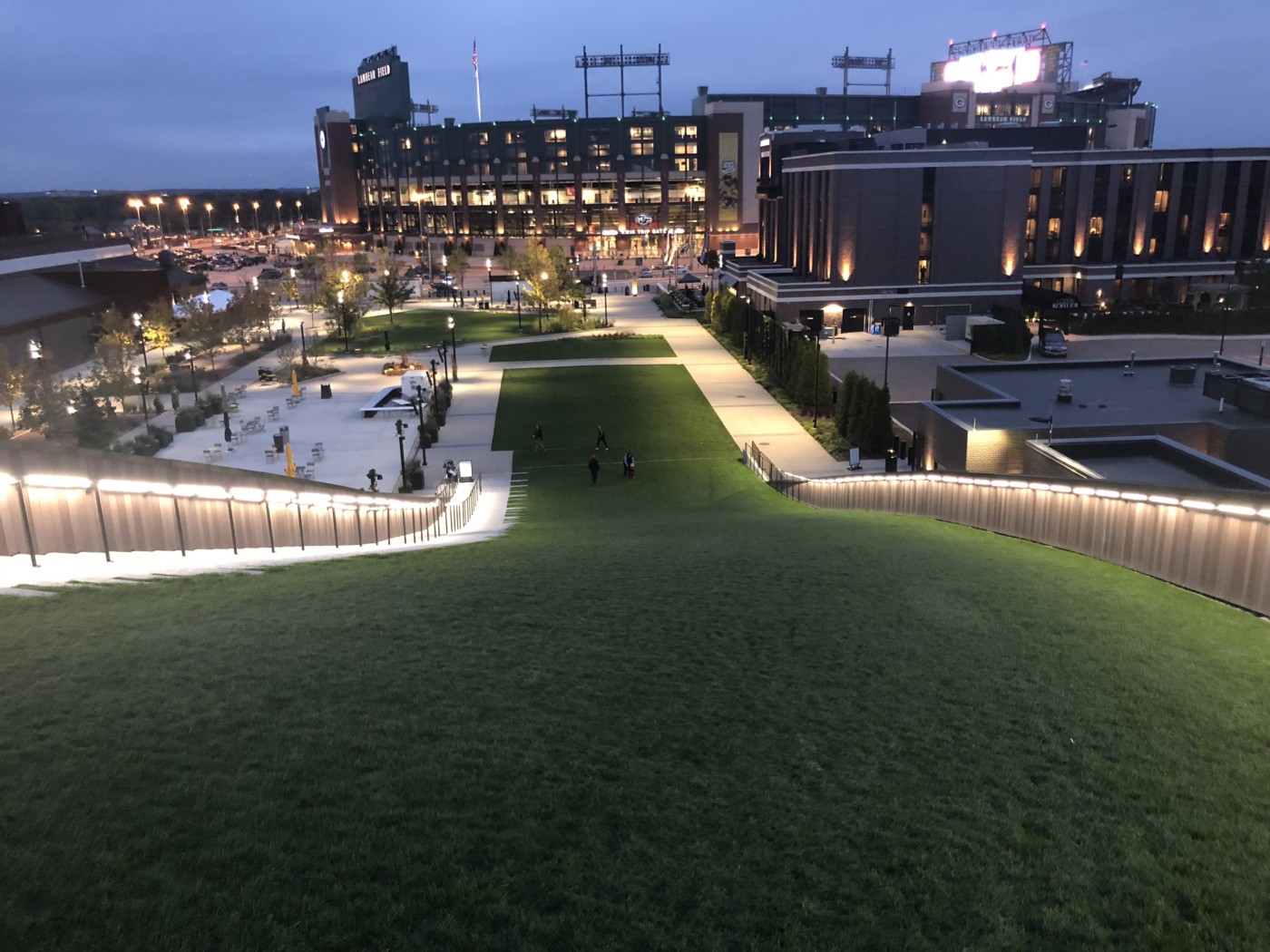 If you think it’s weird that an NFL football team would spend millions to build a hill, you are not alone. It is quite a weird concept — but somehow it works. The hill offers amazing views in the summer and snow tubing in the winter.

Recommended: 7 Things to Fall in Love with in Green Bay, Wisconsin

Ariens is a national brand based in Brillion, Wisconsin, and being a part of the new projects was obviously important to them. You will see their name all over the stadium.

One note: You will have to pay to snowtube (last we heard, it was $3 per ride), which is expected. Although tourists likely expect to pay for most activities, locals also have to pay — and so you will not see many of them on the hill. 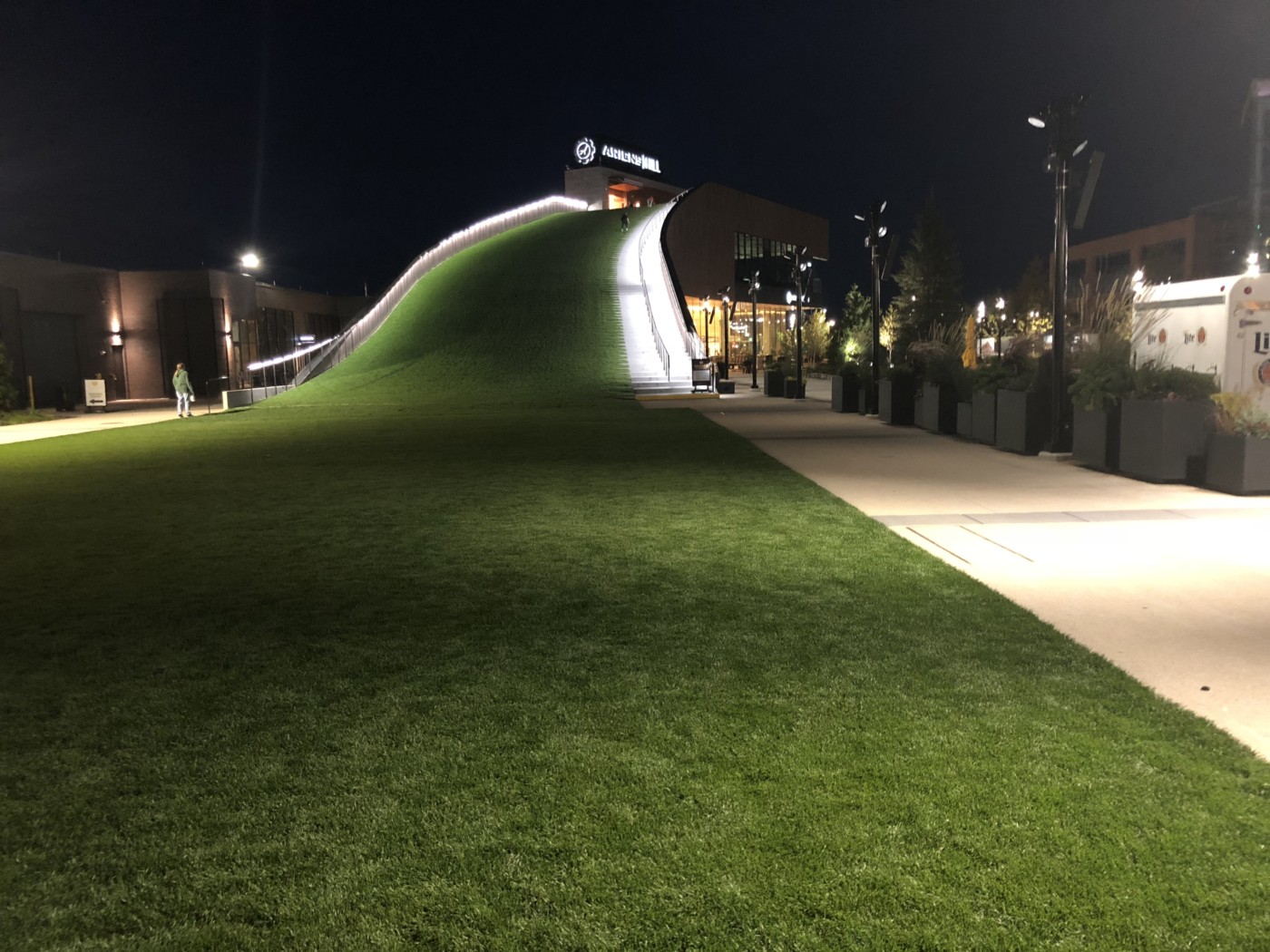 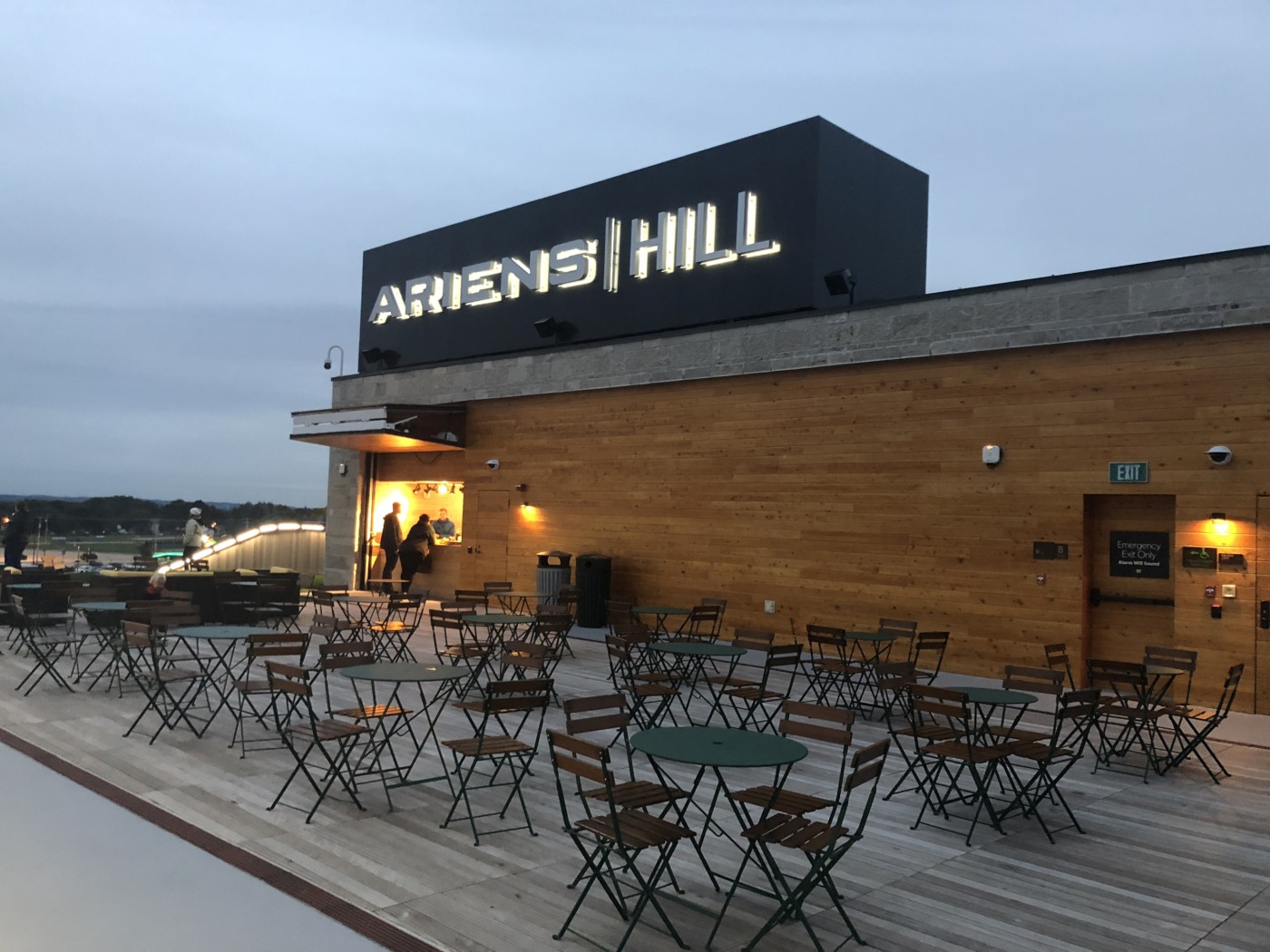 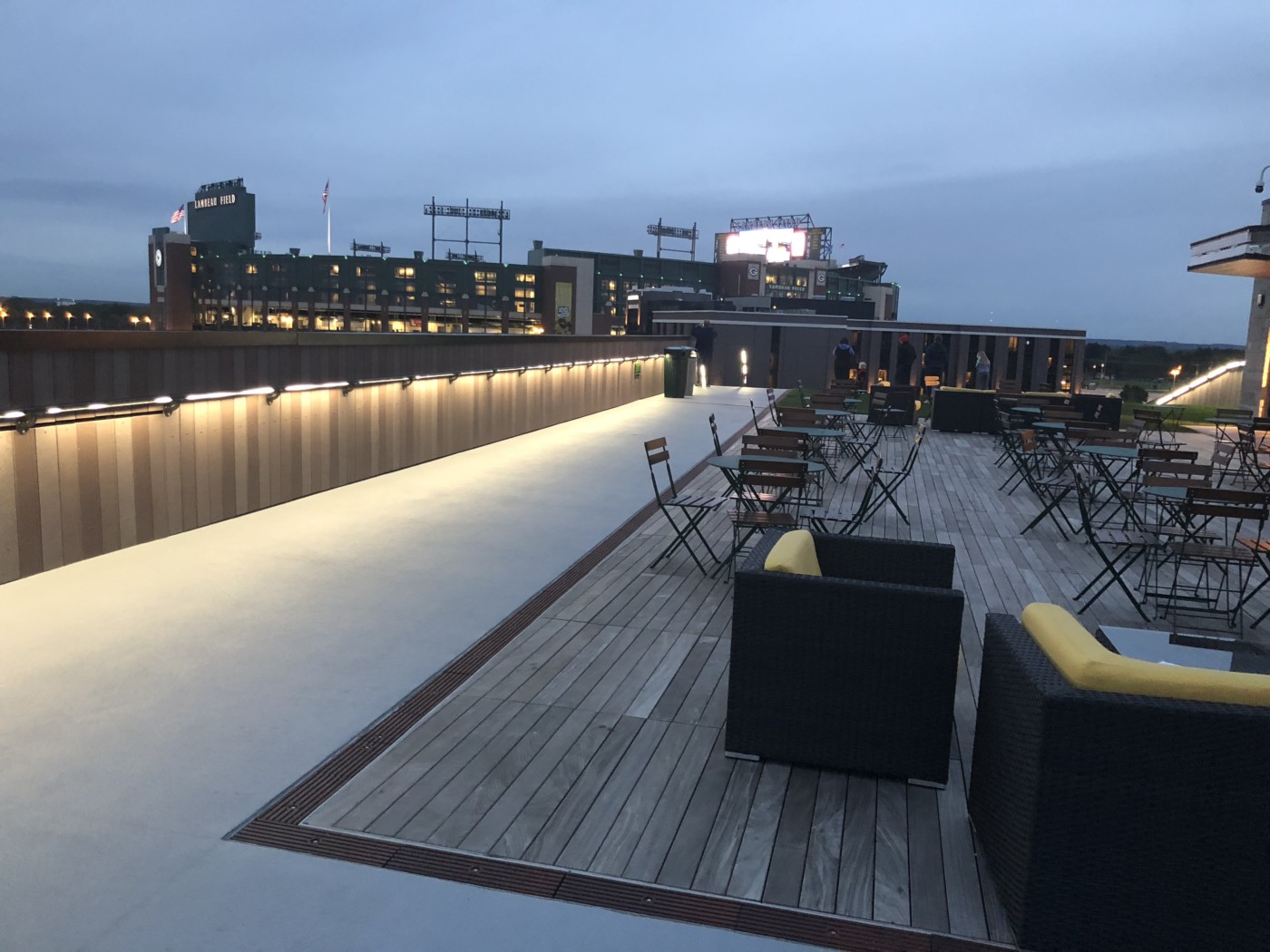 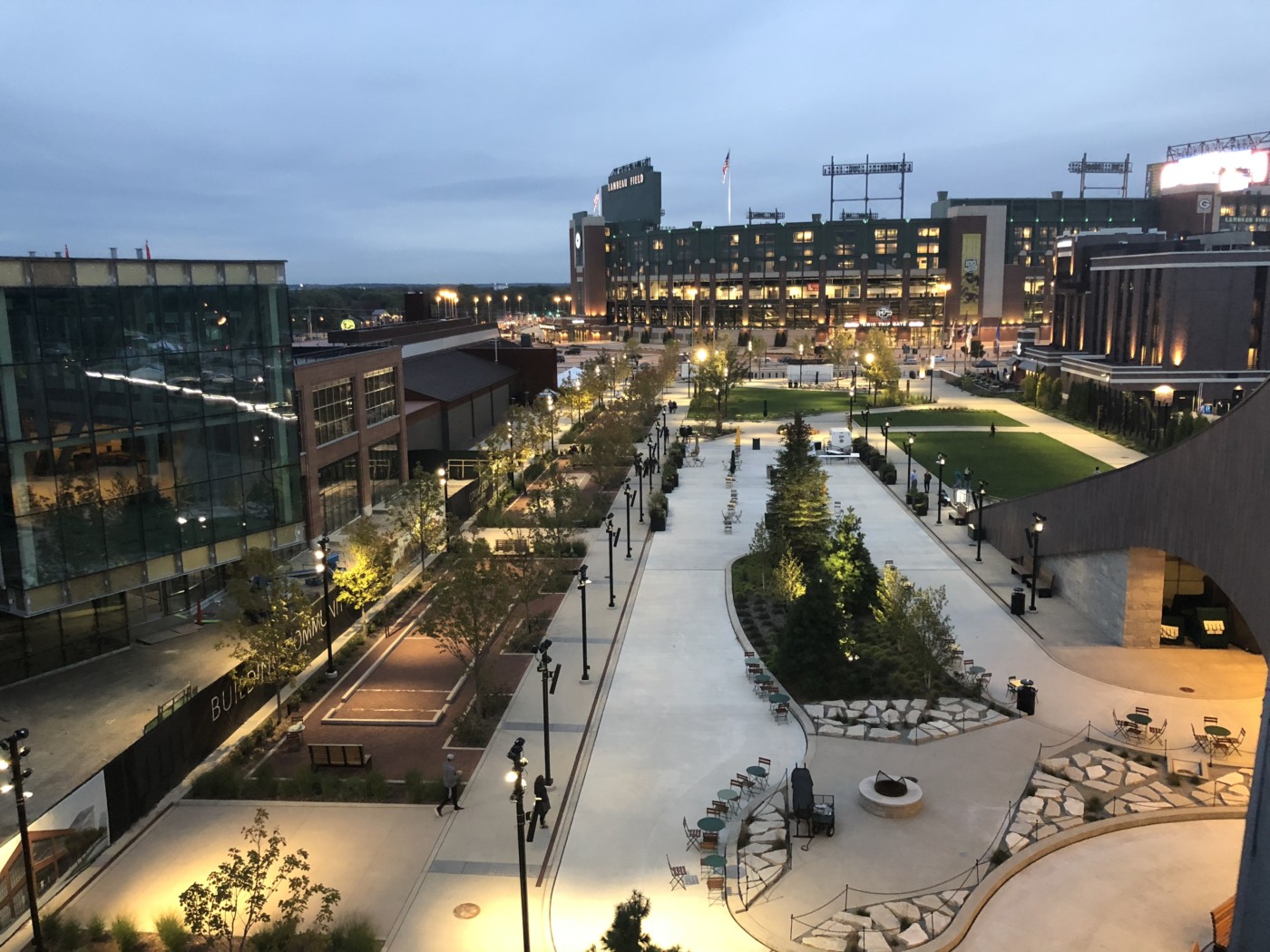 Although there was no ice in when we visited Green Bay last time, you can see the outline of the ice rink below.

Wisconsin is cold, and that lends itself to a large amount of ice rinks in the area. The ice rink at Titletown is not a normal ice rink-sized area — but it actually loops around the restaurant and other buildings in the area.

You are not going to get the normal ice skating experience, but it’s fun to say you skated there. It’s perfect for a Packers weekend, a date, or just a fun night out with your family. 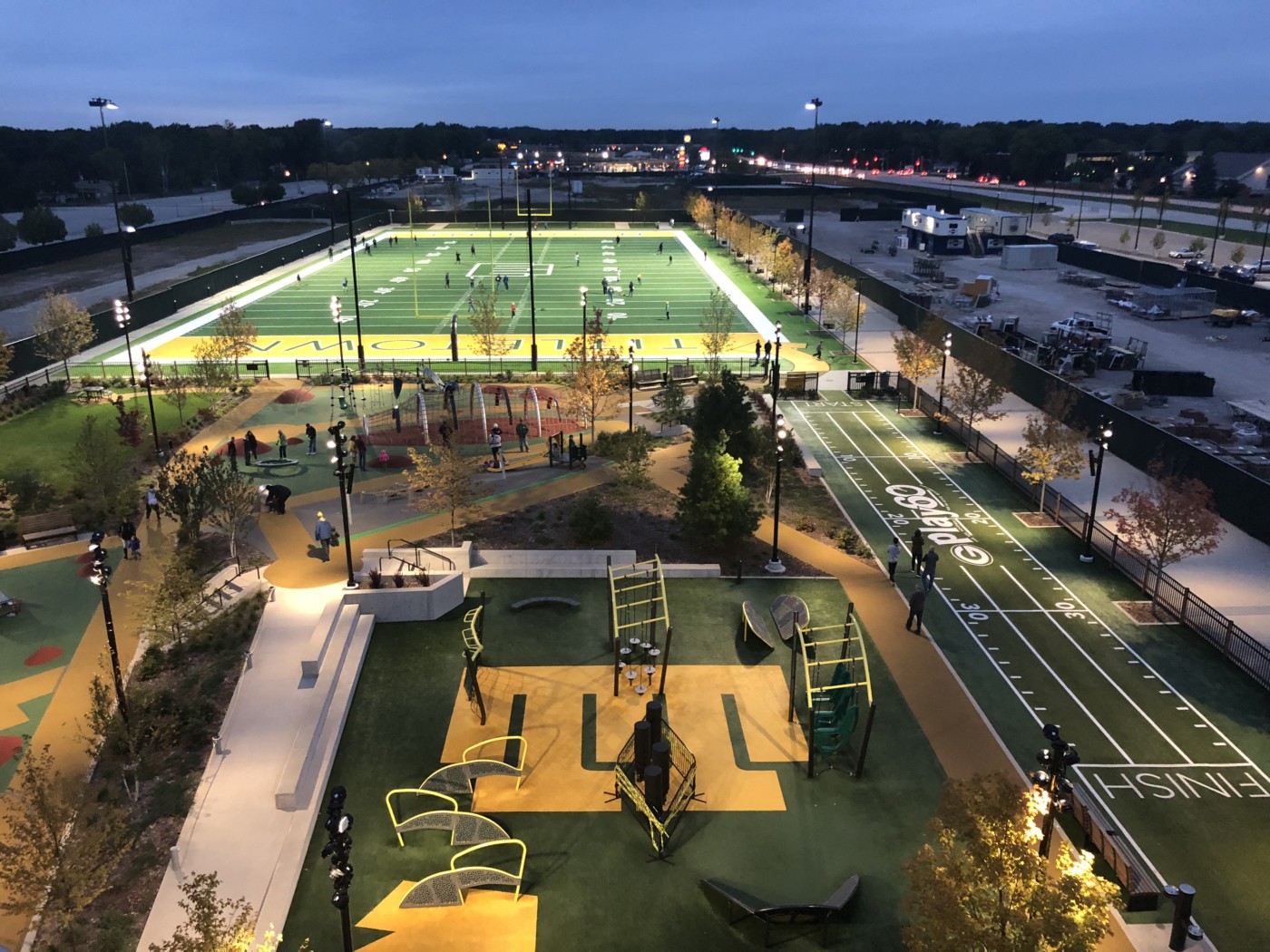 The entire playground area includes numerous sports and activities safe for people of all ages. If you are going to a game, or even if you’re just there to see the stadium, heading over to the playground area is a good time for families, Packers fans, or even fans from that week’s opposing team.

The Track at Titletown 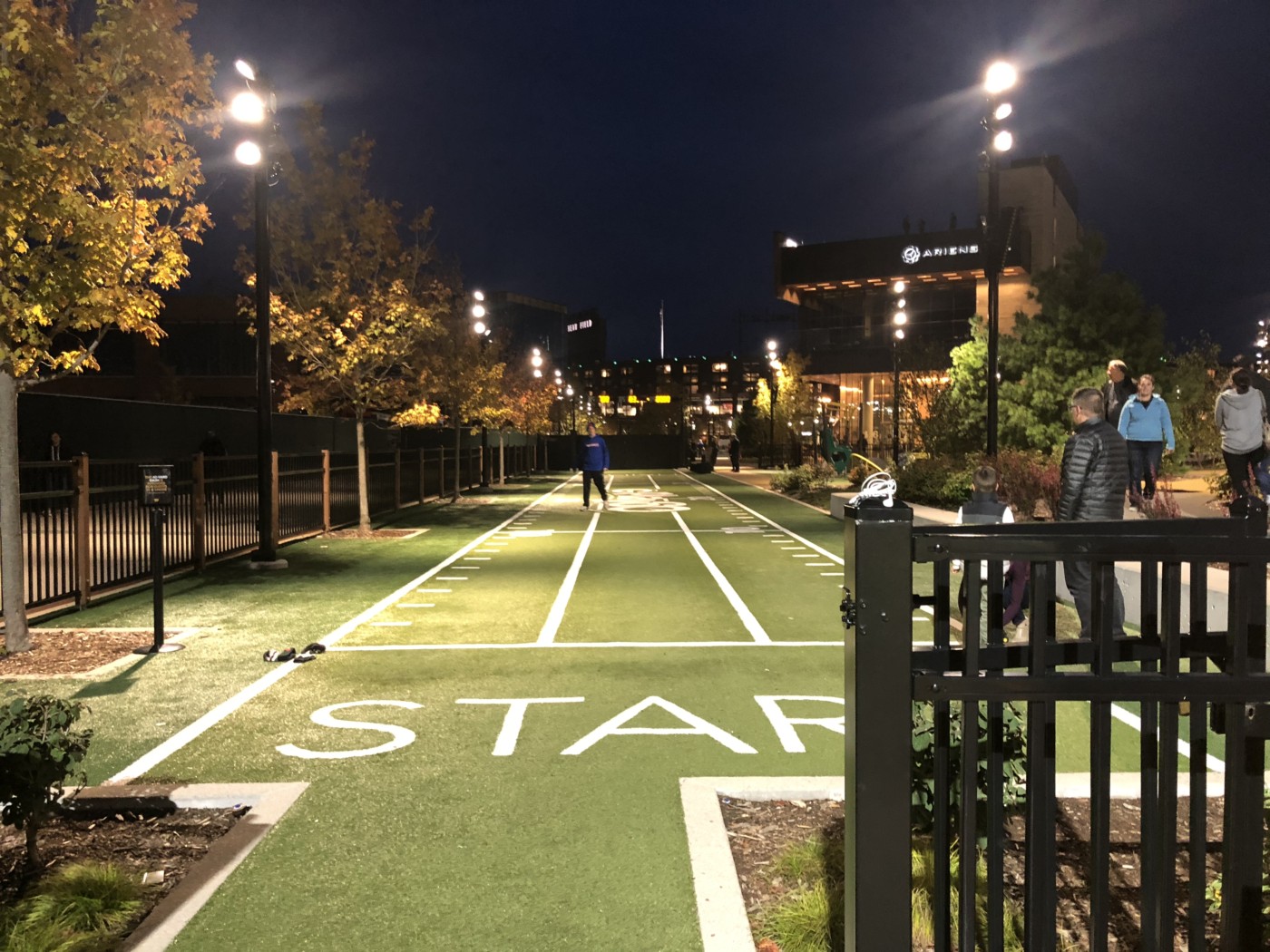 This track is one of the coolest parts of Titletown. It is short, which makes it a sprinting track, but what makes it so cool is that it times you. The track has a sensor (under it, I am assuming?) that starts the timer the second you cross the starting line.

They do recommend that only children should use the track, but if you find it empty, it is a pretty fun time. 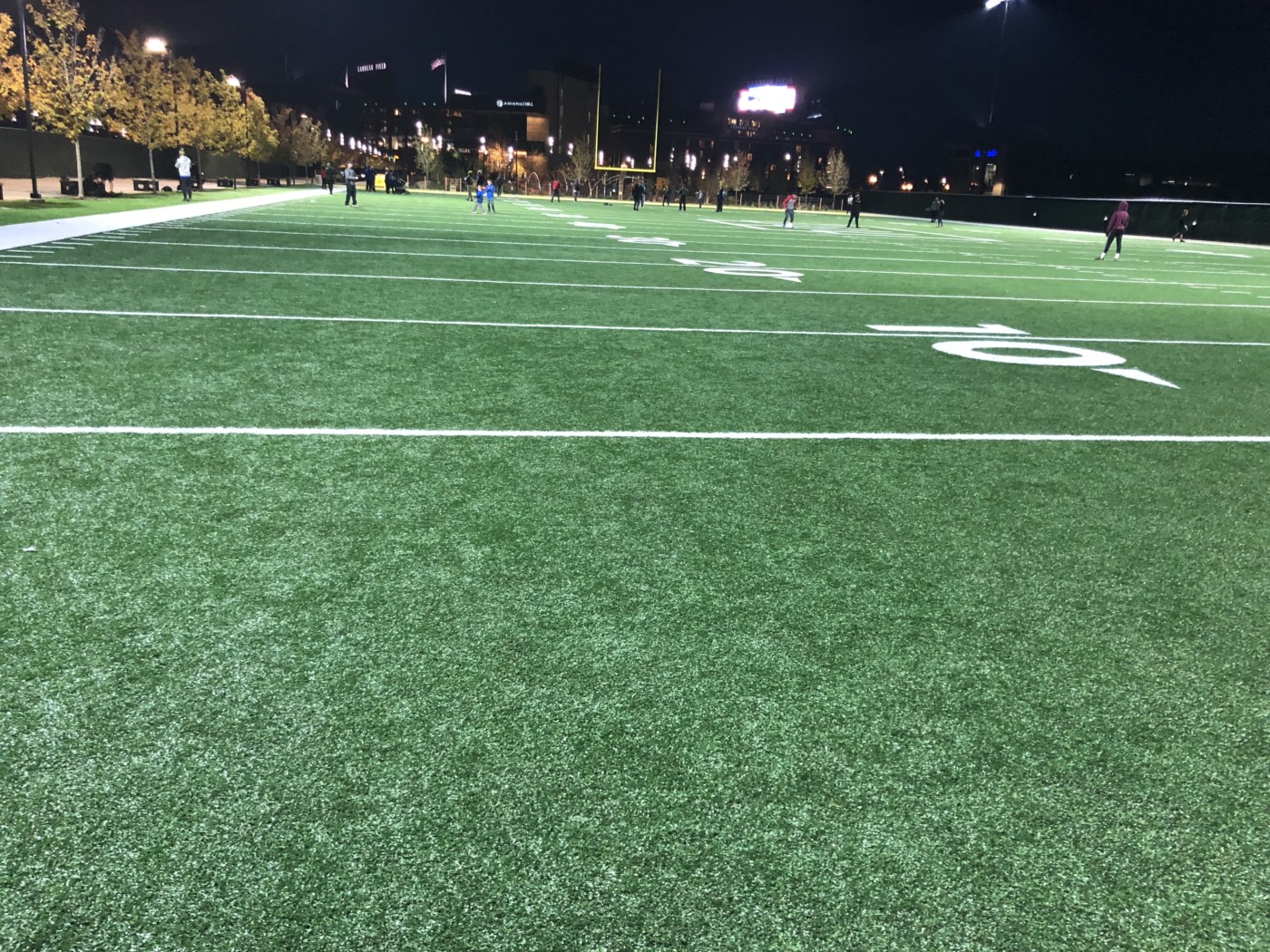 The field in Titletown is a full-sized football field that allows you to play football in the vicinity of Lambeau Field. On a football weekend, you will see hundreds of people throwing the football around or even playing soccer on the field.

It is a great location for photo shoots, or just letting off a little steam before a Packers game. 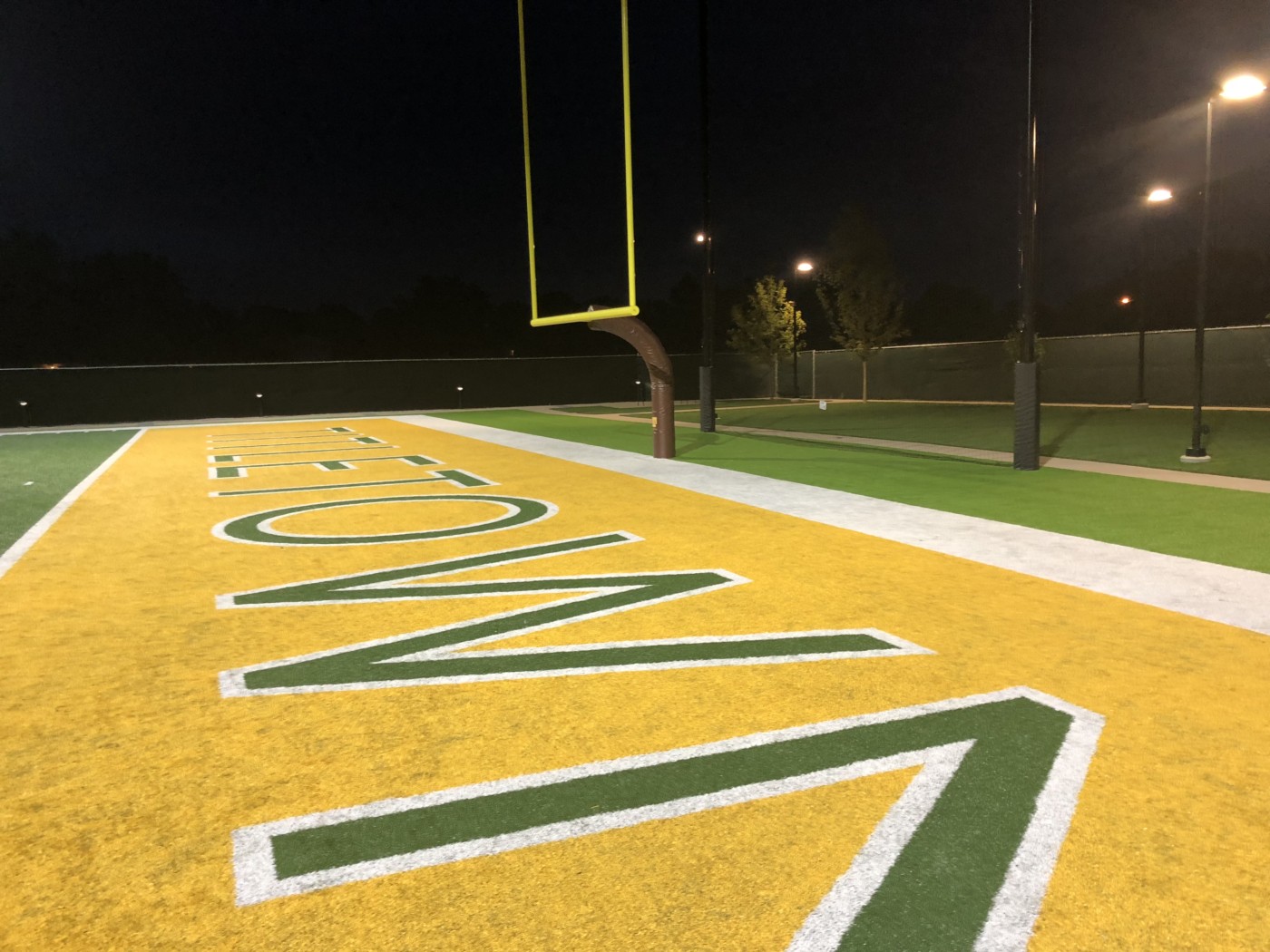 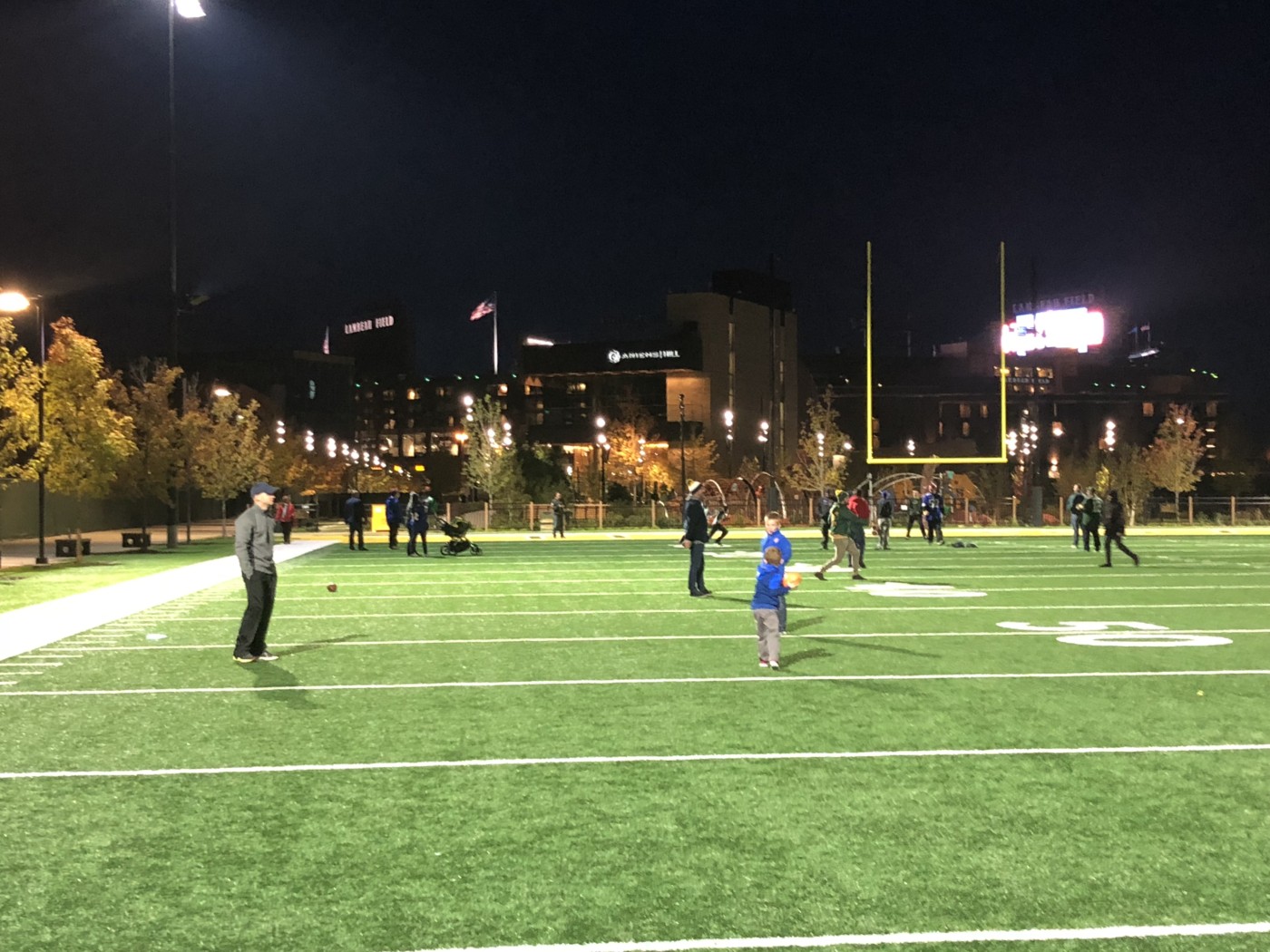 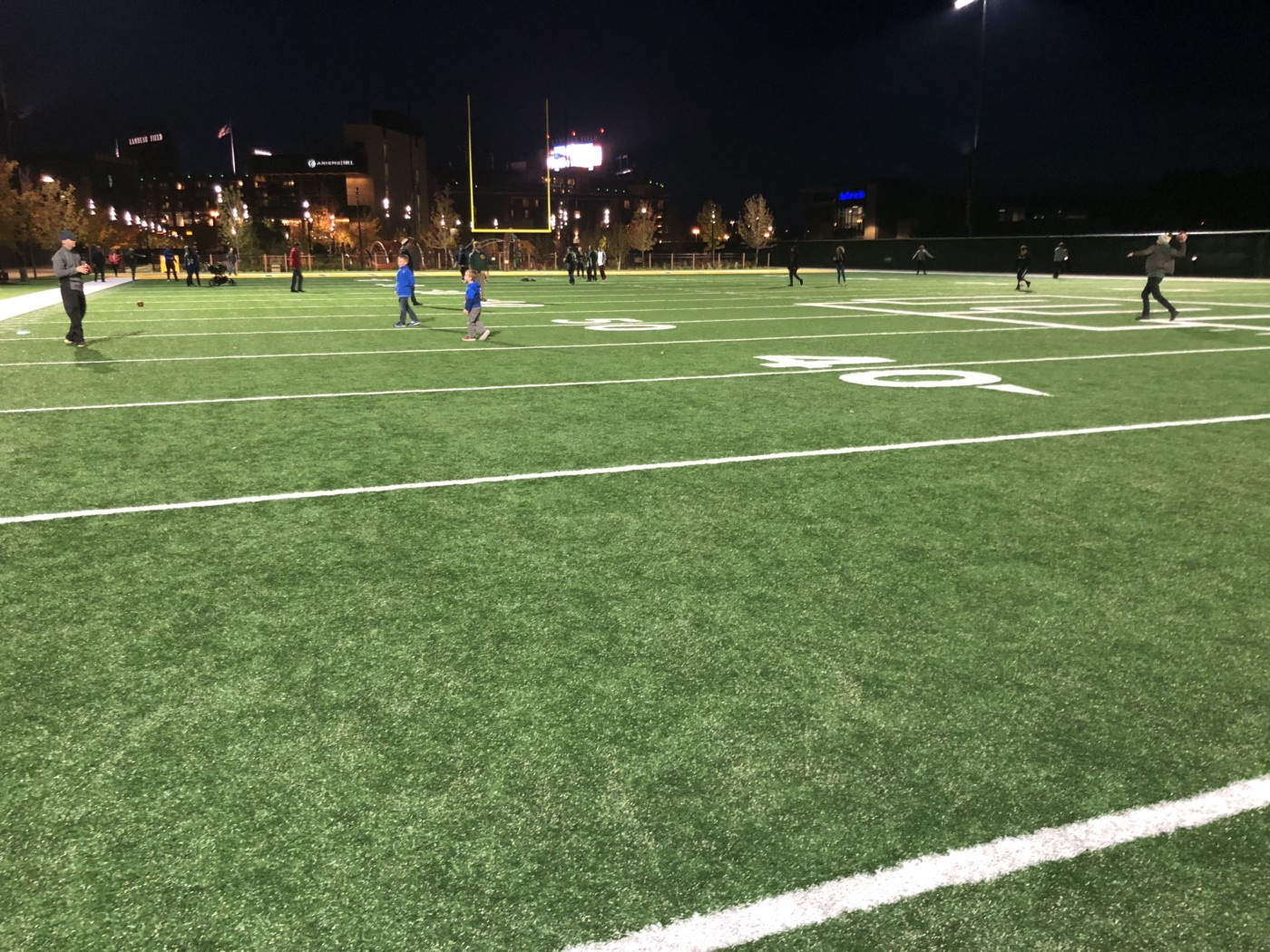 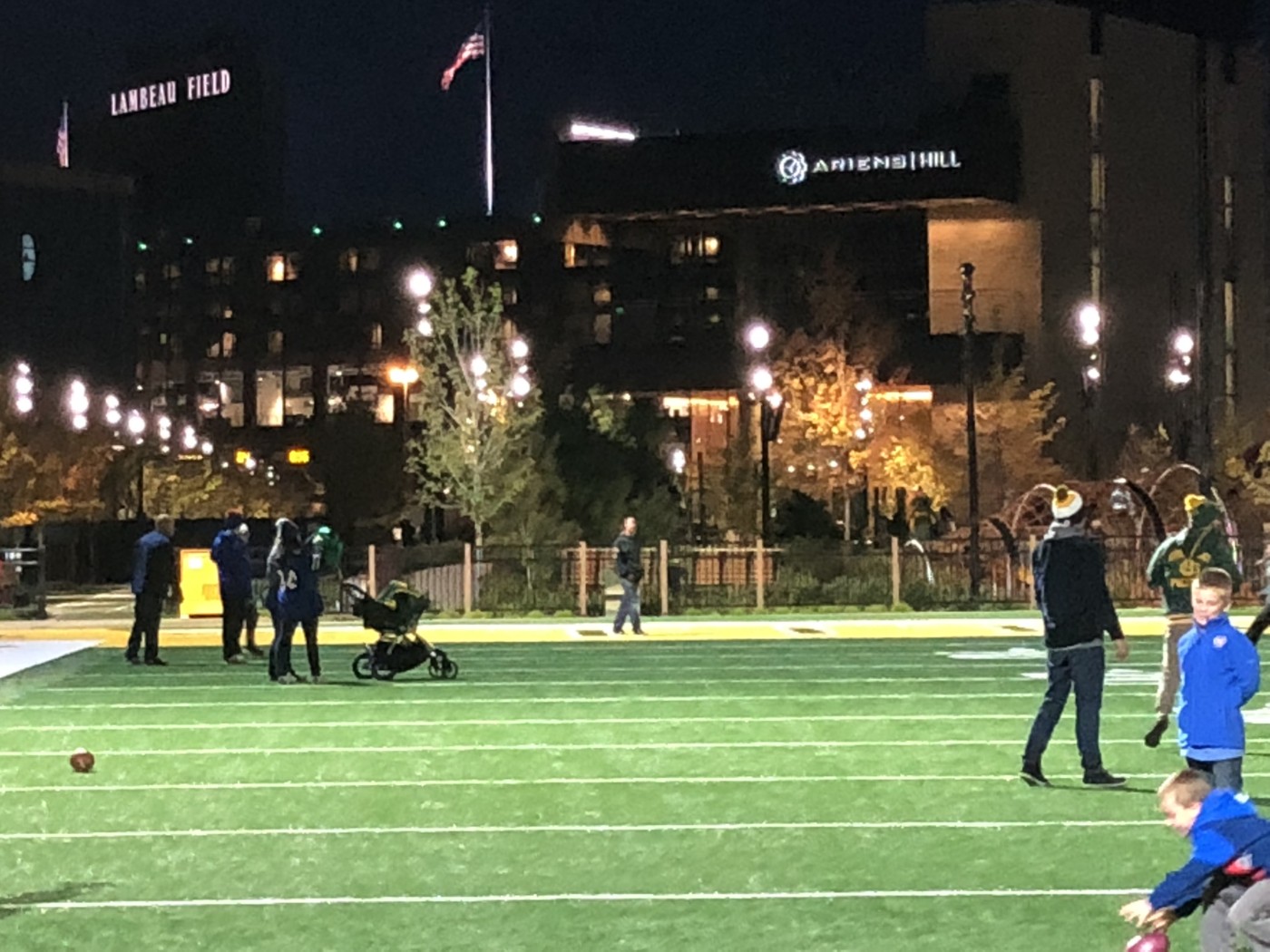 Green Bay, Wisconsin is an amazing town. Although it may seem like there is not much to do for non-Packers fans, the team and city are working to make it a fun tourist destination. Before Titletown was built, there was not much to do near the stadium, besides visiting the stadium.

But now, you can get a hotel next to the stadium and have plenty to do within walking distance for the entire weekend. Titletown is not yet complete, and there is plenty more to be added. But for now, there is a lot to do there and is well-worth visiting.

Here are some more photos of Lambeau Field and Titletown District in Green Bay, Wisconsin: 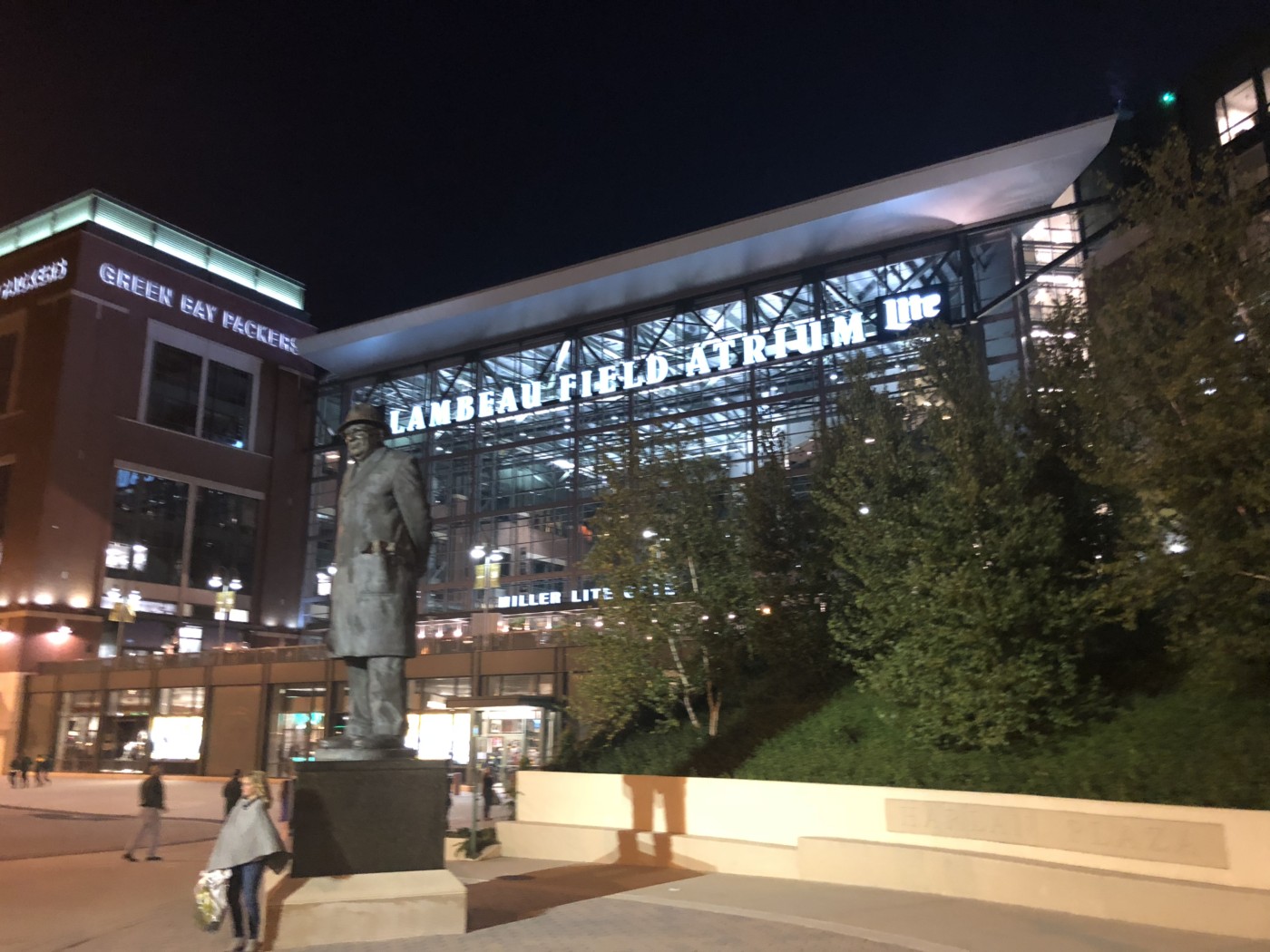 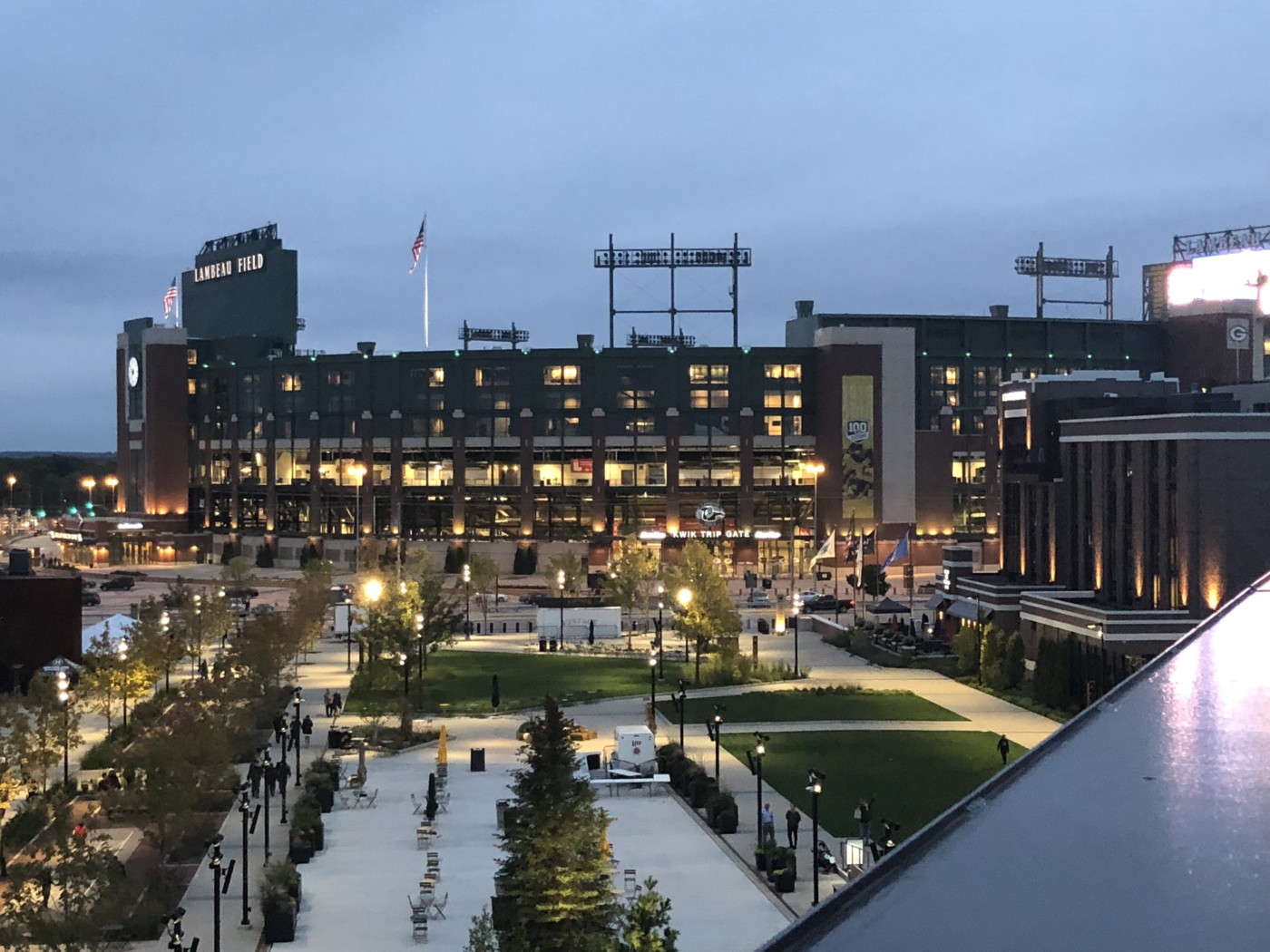 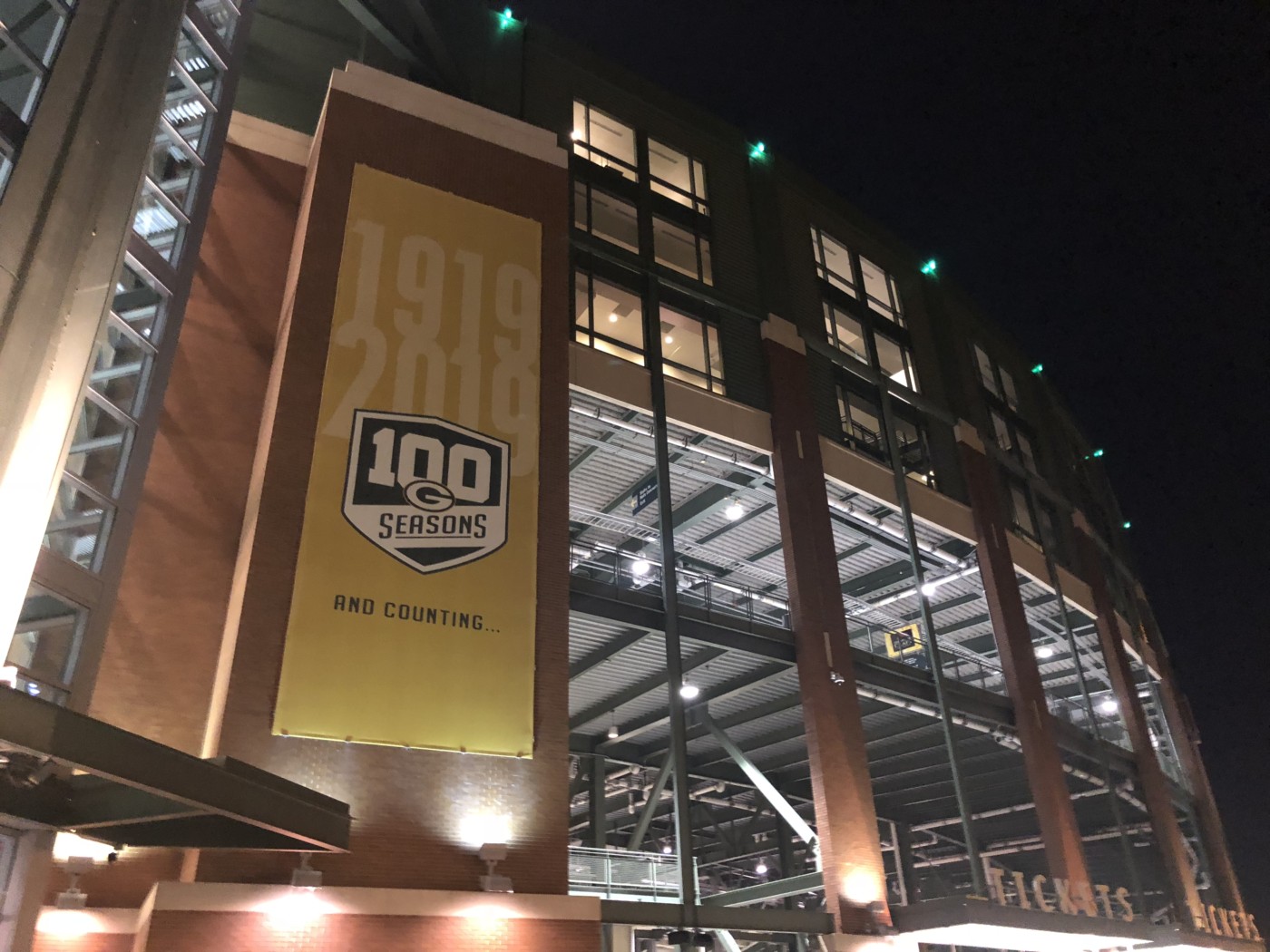 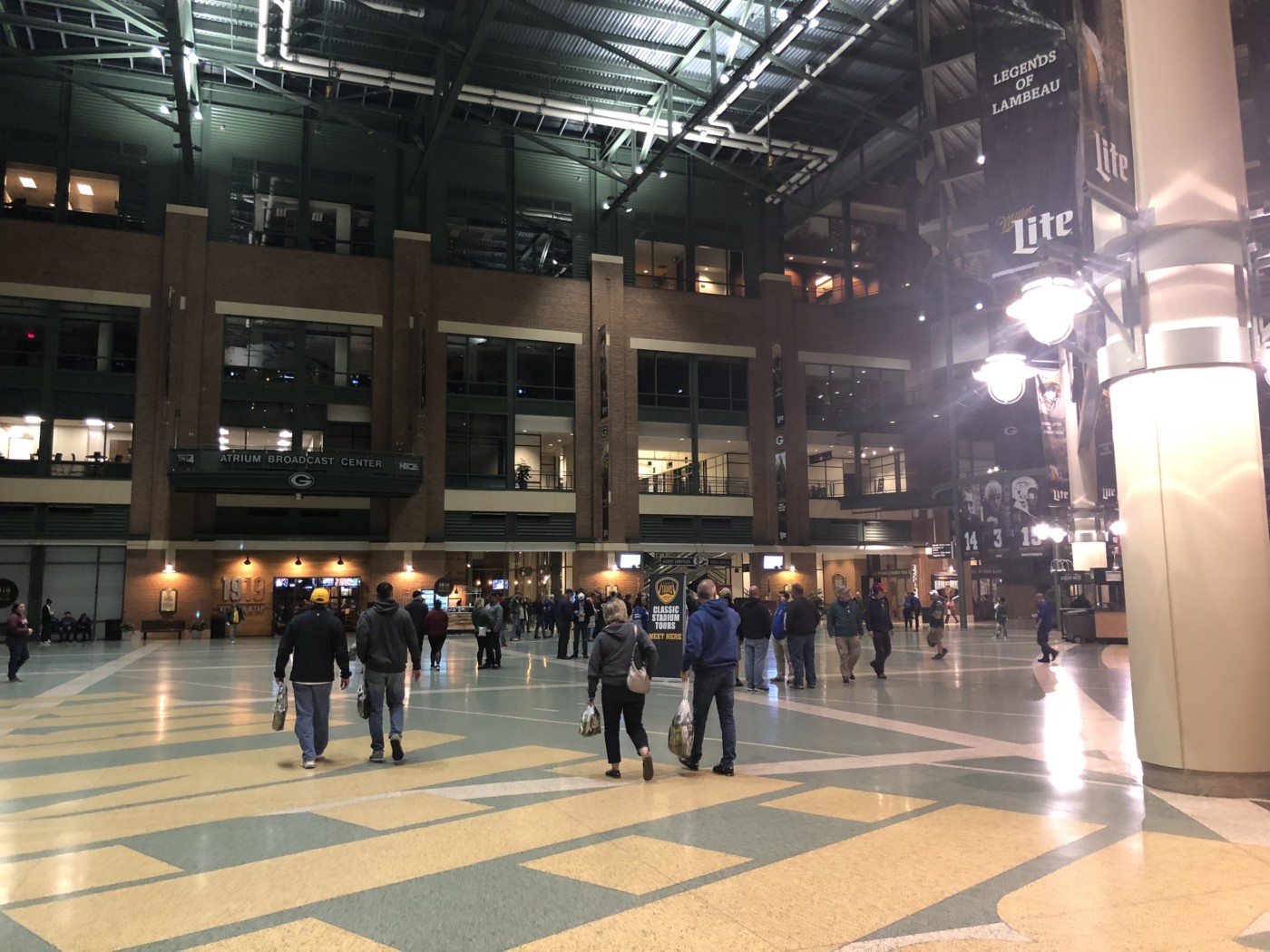 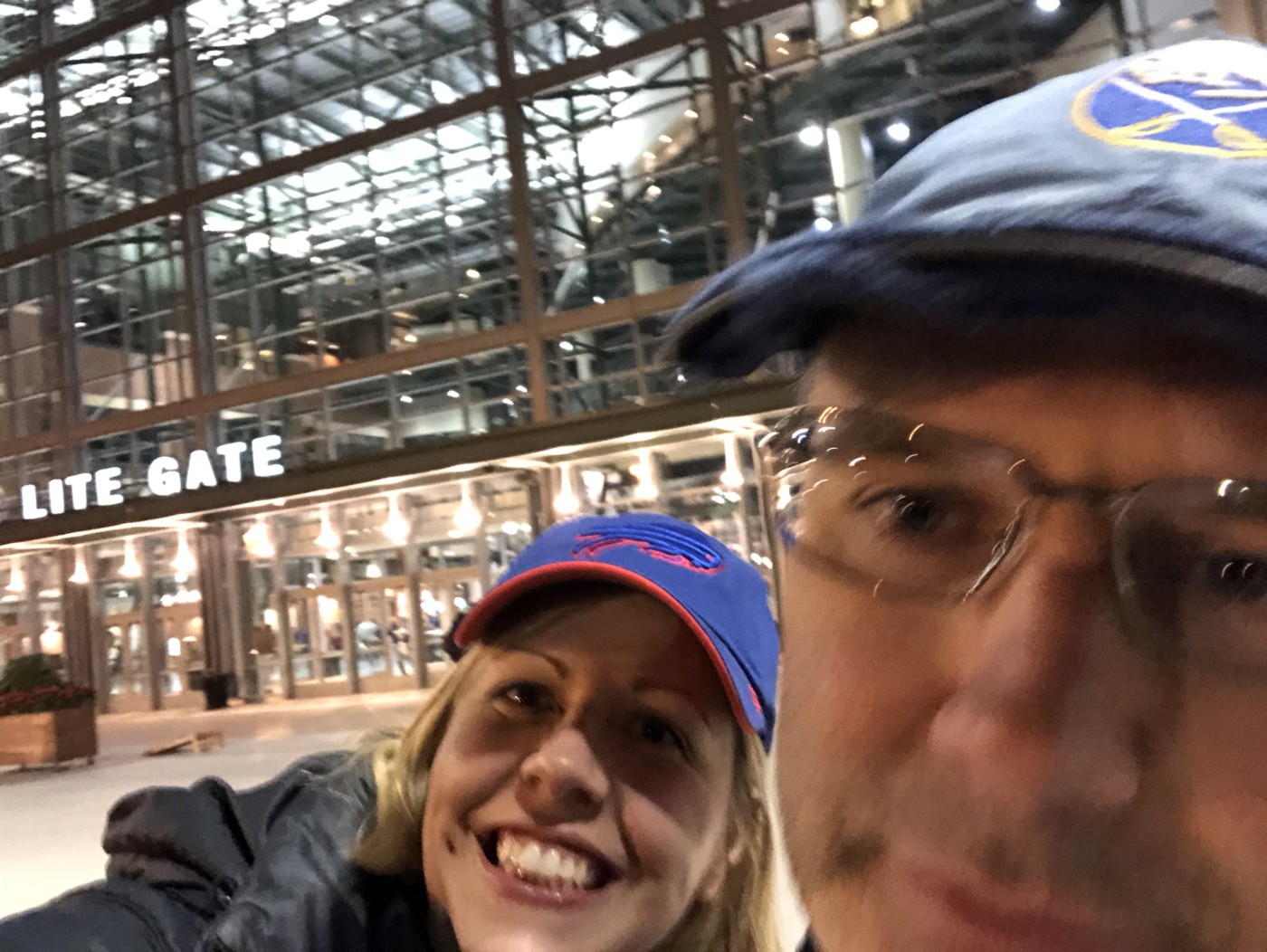 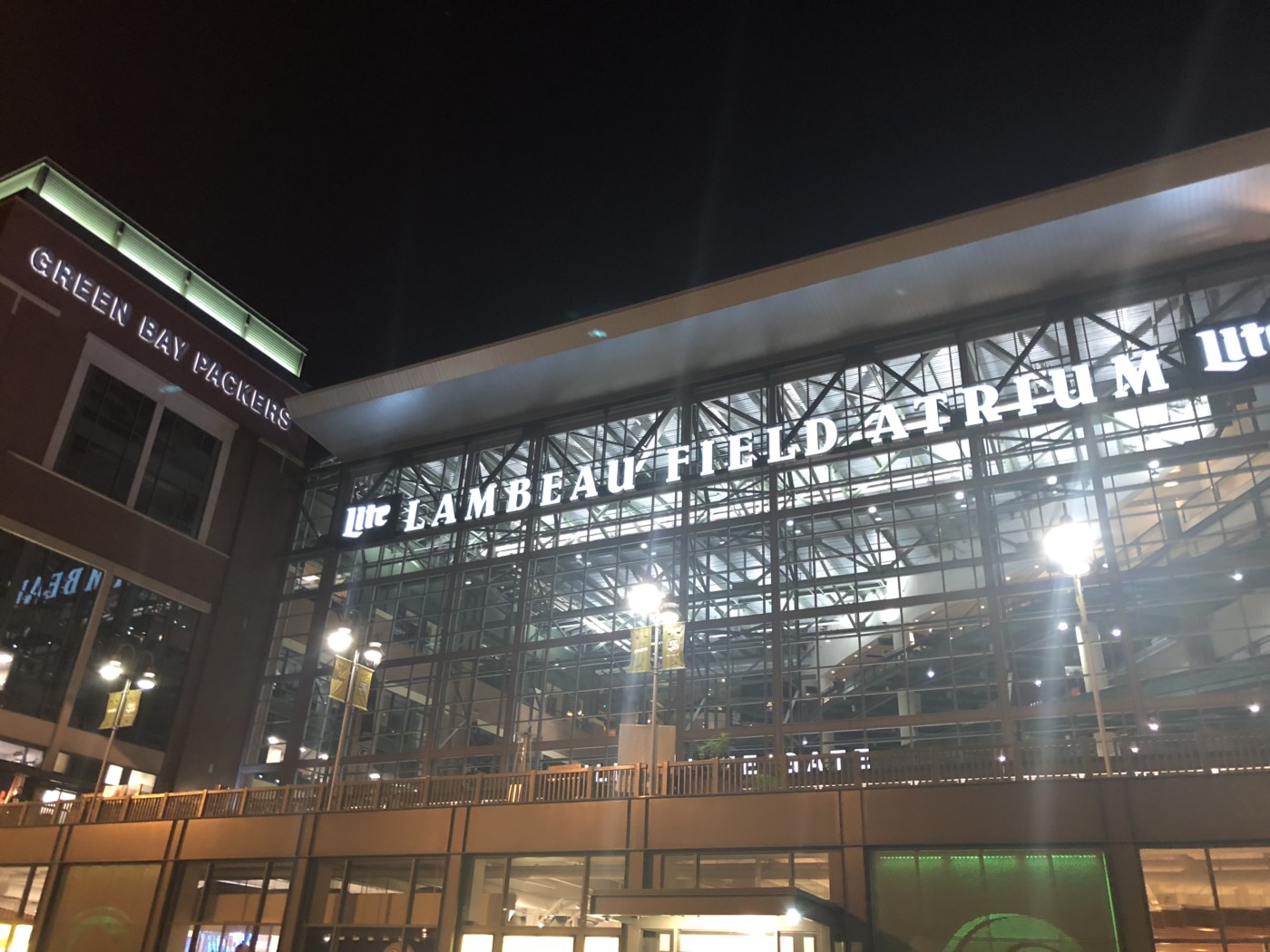 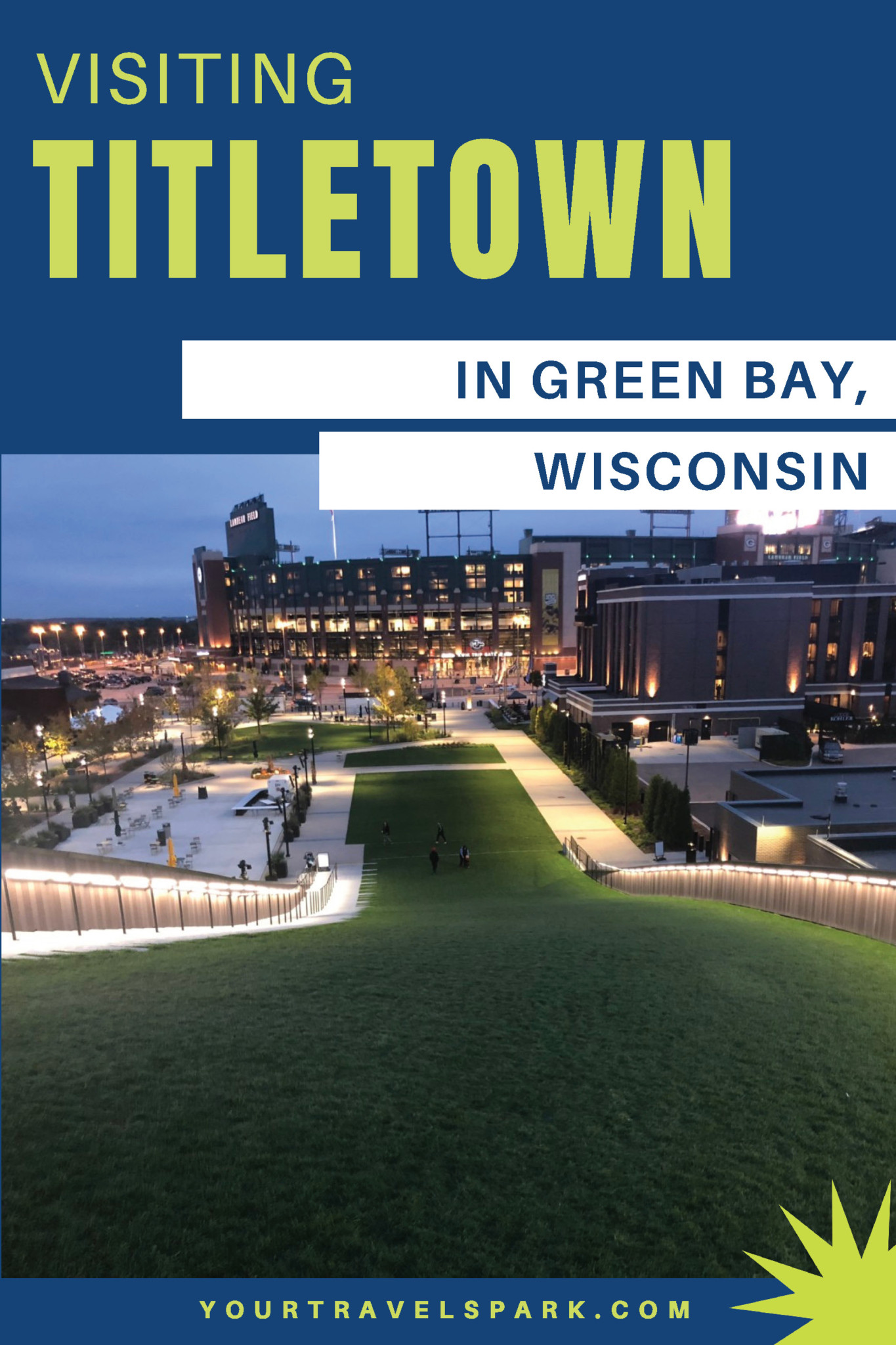 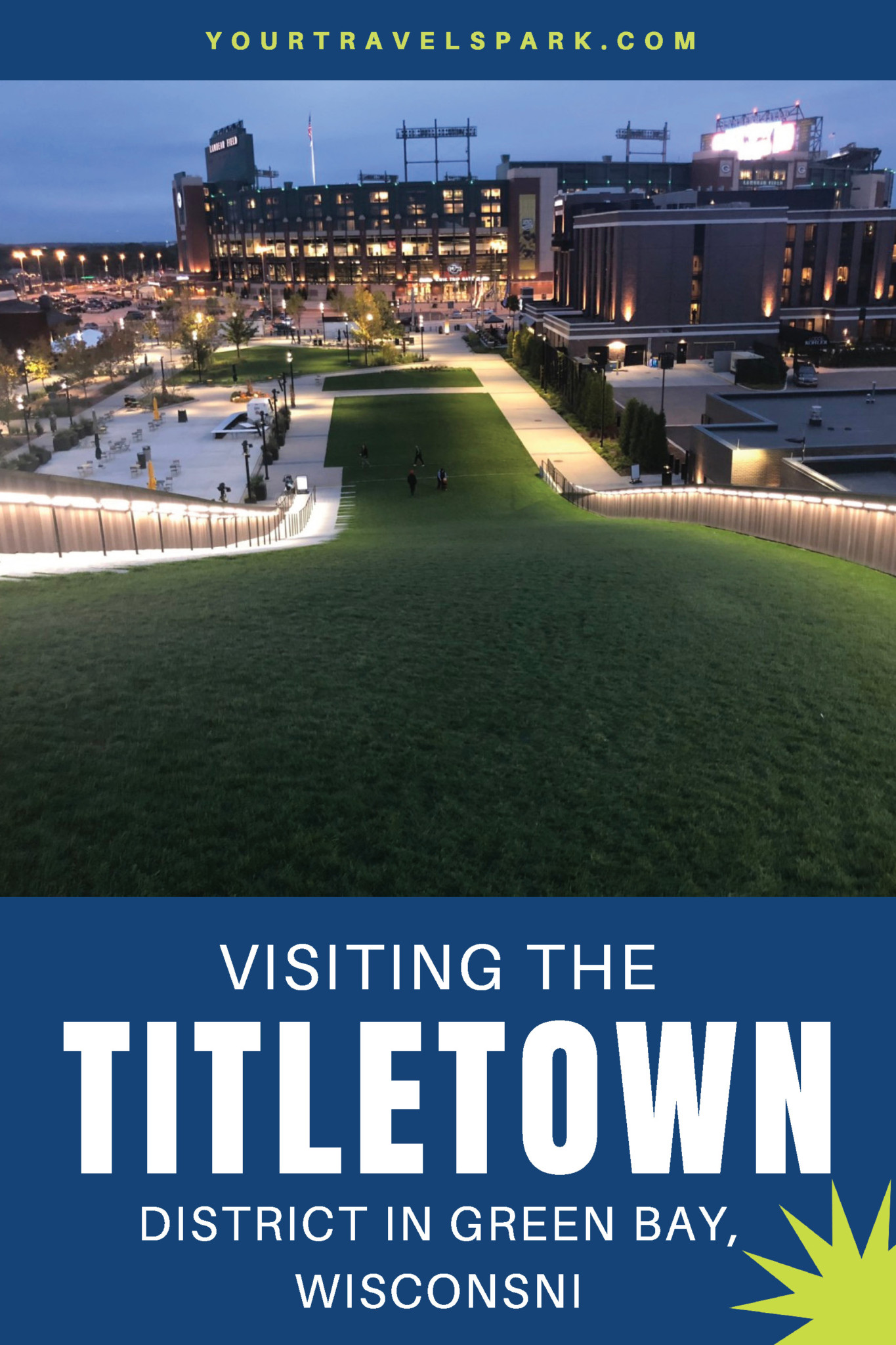 Norwegian Airlines to fly to Barcelona from 4 U.S. cities

The best day trip from Prague: 4 things to do in Pilsen, Czech Republic

Visiting the Parthenon in Nashville, Tennessee