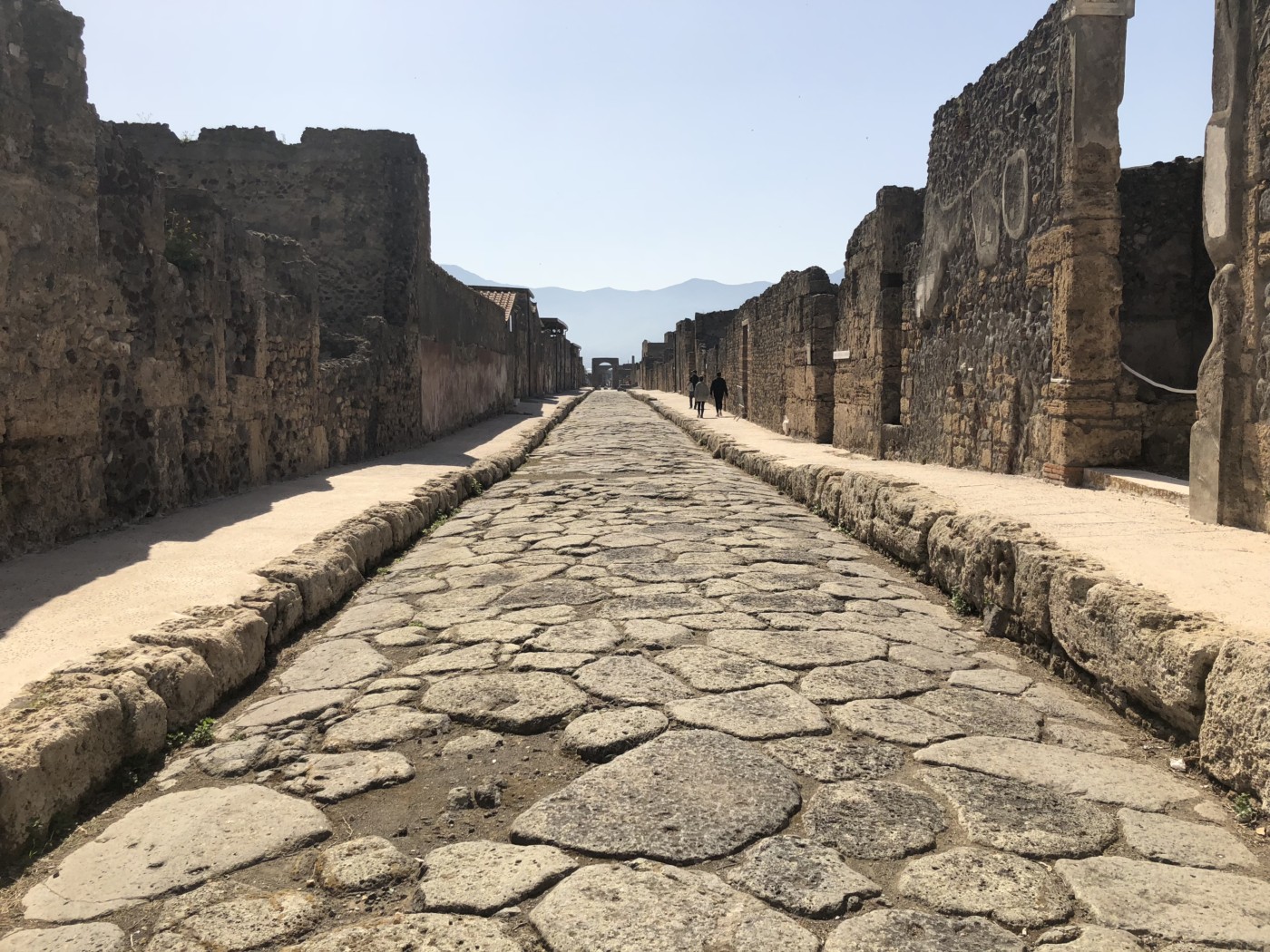 If you are traveling to Italy, visiting the city of Pompeii and hiking Mount Vesuvius are must-see locations. There are so many Italian cities with amazing history, but none have been preserved the way Pompeii has. We have some tips on how to get to Pompeii from Rome, Italy, as well as everything you need to know about hiking Mt. Vesuvius.

Visiting Pompeii can be done in a variety of ways, whether you drive, take a tour, or train a train. For our trip, we opted to take the train from Rome so we wouldn’t have to worry about driving in a foreign country or finding parking once we were there.

One of the most complicated parts of visiting Pompeii is simply getting there. You can take a tour of Pompeii from Rome, drive down from Rome to Pompeii, but a train is probably your best option. However, you will need to take multiple trains to get to Ancient Pompeii.

Train 1: TrainItalia from Rome to Naples 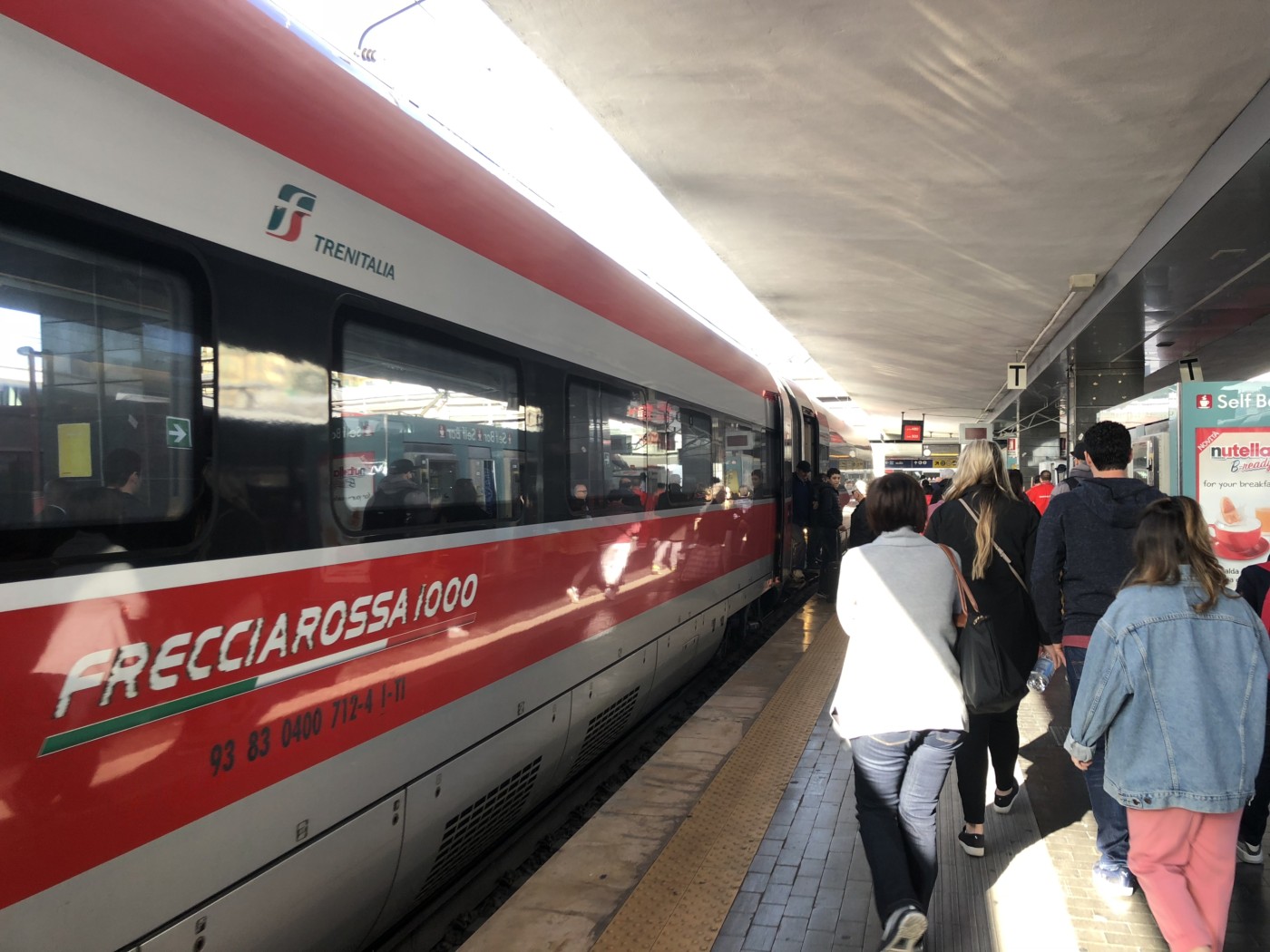 The first train you will take is a TrainItalia trip from Rome to Naples, and this may be the only one you want to purchase in advance. This is because if you purchase your return trip in advance, you will be limited on time and may feel the need to hurry.

Recommended:Things to do in Naples (beyond the best pizza in the world)

The return ticket will end up being more expensive if you do not buy it in advance, so you should decide what is more important to you.

The Circumvesuviana Train from Naples to Pompeii

Once you get to Naples, you will stay in the same train station and find the local train to Pompeii — just look for the signs that say Circumvesuviana train. I have heard stories of men trying to sell you tickets to this train on the platform, but I didn’t see that. However, if that happens to you, do not buy them. You can buy your ticket from the ticket booth for this specific train from Naples to Pompeii. There is no need to buy them in advance.

Europe: Should I rent a car or take the train?

Please keep in mind this train is as local as local trains get. It’s basically a subway, but a subway you will be on for nearly an hour. There is a good chance you will not have a seat, so be prepared to stand for this amount of time.

Learn more about the Circumvesuviana train.

This train will take you directly from Naples to Pompeii, only a few steps away from the entrance of the ancient city.

When you are ready to head back to Naples from Pompeii, you can purchase your return ticket when you arrive back at the train station. I would suggest this because you will not be worried about getting back to your train on time.

Get your Priority Entrance ticket to Pompeii here.

The City of Pompeii 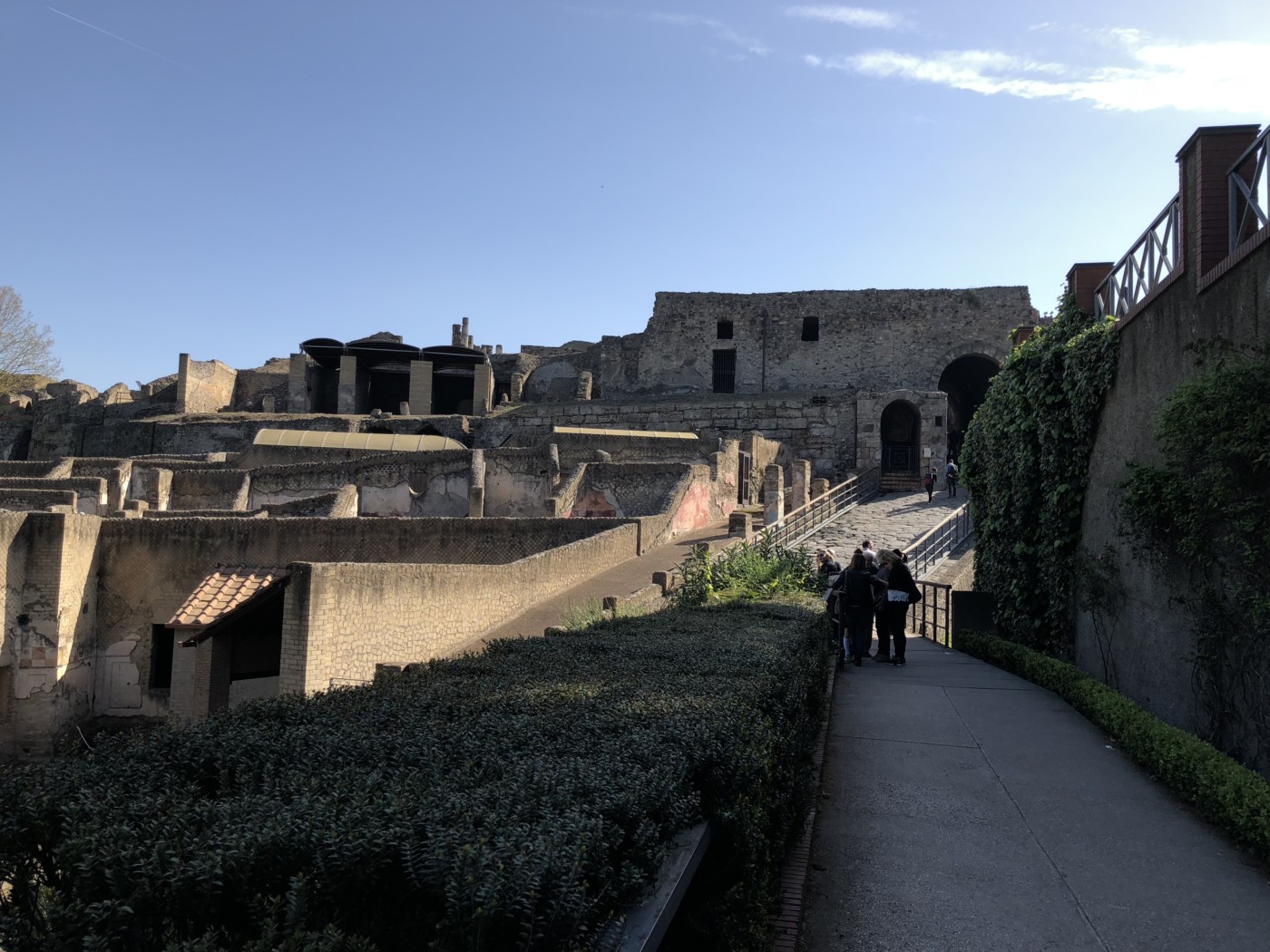 When you arrive at Pompeii, Italy, you may be overwhelmed with the sights. For anyone who learned about the city and its destruction in school, you will be blown away by how large and intact the city actually is.

If you don’t want to take a train, learn more about taking a full-day Pompeii and Mount Vesuvius tour from Rome.

Although you may be excited to get your journey going once you arrive in the city, take the time and stop in the Visitor Center in Pompeii. You will find this through a door in the first hallway you walk through when entering the city of Pompeii.

This center is so much more than merch or a quick overview, it has a short video and a 3D map that explain to you the different areas of the city and what it was used for.

This is important to direct you when you do venture out into the city, as well as giving you a background on the culture and history of Ancient Pompeii in its height.

Visiting the Vatican: Everything you need to know

One of the most important things to know when traveling to Pompeii is that you could realistically spend days there and still not see everything. When Mount Vesuvius erupted in AD 79, there were an estimated 11,000 people living in Pompeii, a city that was around 170 acres.

If you are there for only a day, or a half day, you should either plan what you’d like to see or just know you will not see everything — which is OK too. Nothing is too far and you can walk from one end to another in a matter of minutes.

Here are some things you should make a point of seeing: 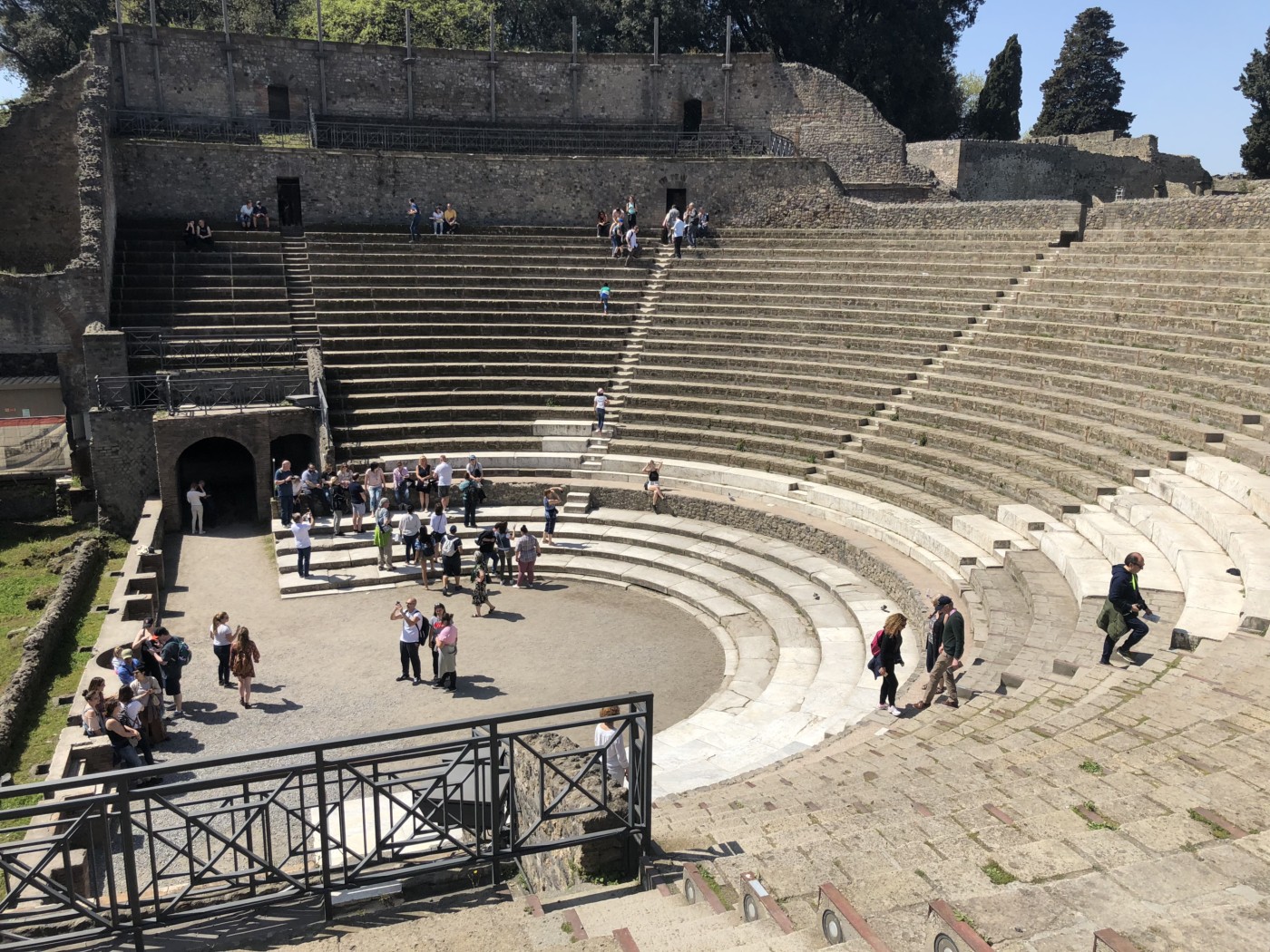 There are three buildings in the theatre complex in Pompeii, the Large Theatre, the Odeon, and the Quadriporticum.

Recommended: Why You Must Include Villa Oplontis In Your Pompeii Itinerary

The Large Theatre of Pompeii, otherwise known as the Amphitheatre, was built into a natural hill, and held around 5,000 people. The Odeon Theater is a beautiful site, with stadium seating and gorgeous stone making up the seats. Pay special attention to the sound in the building — when standing at the top you can hear even the quietest voices at the bottom. The Odeon holds around 1,500 people. 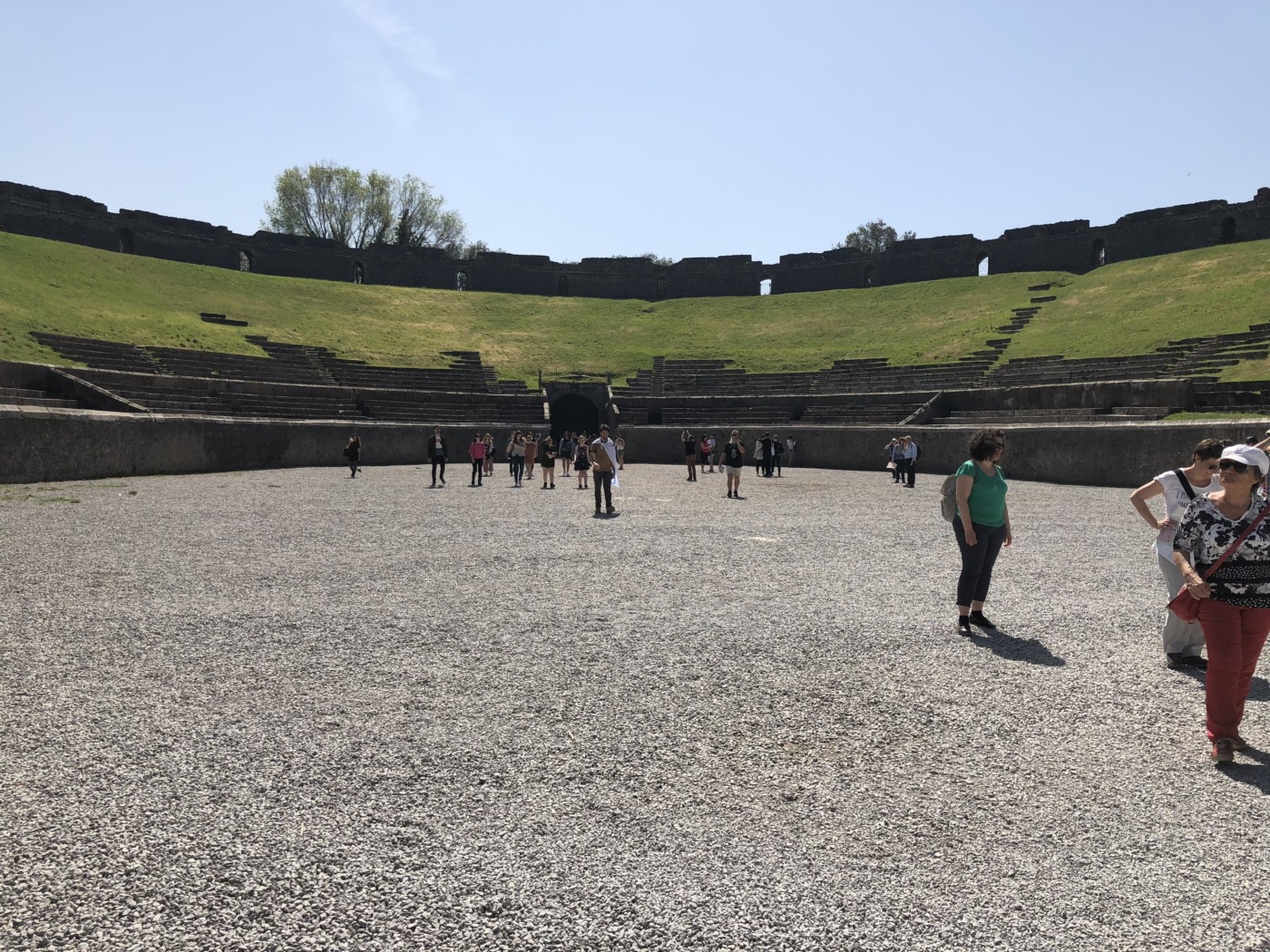 Of all the things you can see in Pompeii, the Amphitheatre of Pompeii is definitely an important one. Although smaller than the Colosseum in Rome, it is still an amazing site for something that was built in around 70 BC. It is also the earliest known Roman amphitheater to be built — having been built more than 100 years before the Colosseum in Rome.

A few things to know about Pompeii: 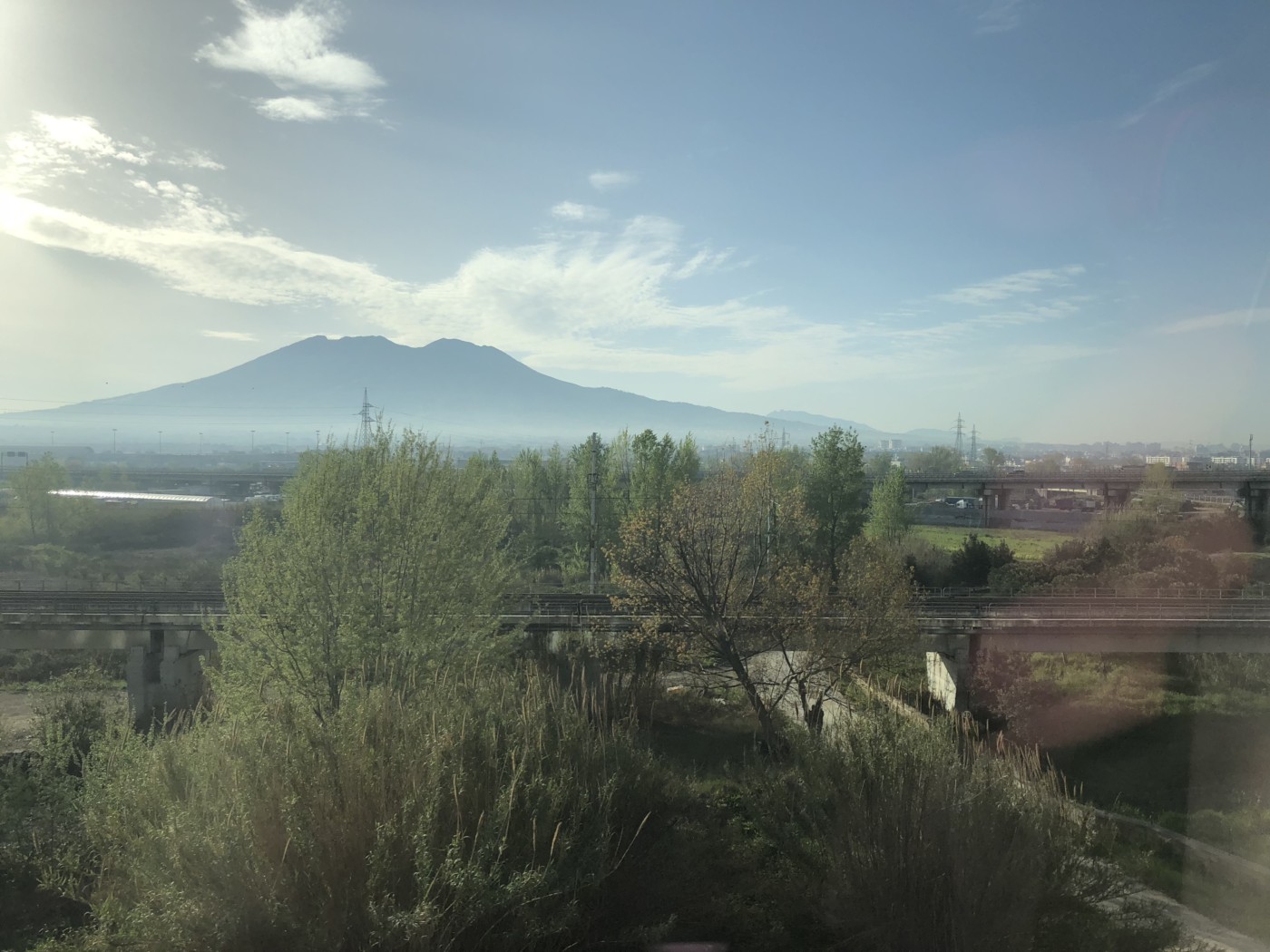 If you are making a trip to Pompeii, it is well worth it to make a trip to make the trip to Mt. Vesuvius as well – as well as hiking Vesuvius. If you took the train from Rome, you are going to have to make a decision on if you want to visit the volcano before or after you visit Pompeii.

Want to learn about another buried city? Recommended: Attractions in Rotorua, New Zealand

Make that decision based on which one is more important to you, because doing both in one day is a lot. To give you an idea, we took the 7:30 a.m. train from Rome, and struggled to get back on the 7 p.m. train to Naples. Your day will be long, and you don’t want to stress out too much on time. We decided to hike Mount Vesuvius second, but if given the choice, I would have traveled to Mt. Vesuvius first. This is because you are relying on others for transportation, whereas at Pompeii you can bide your time however you’d like. 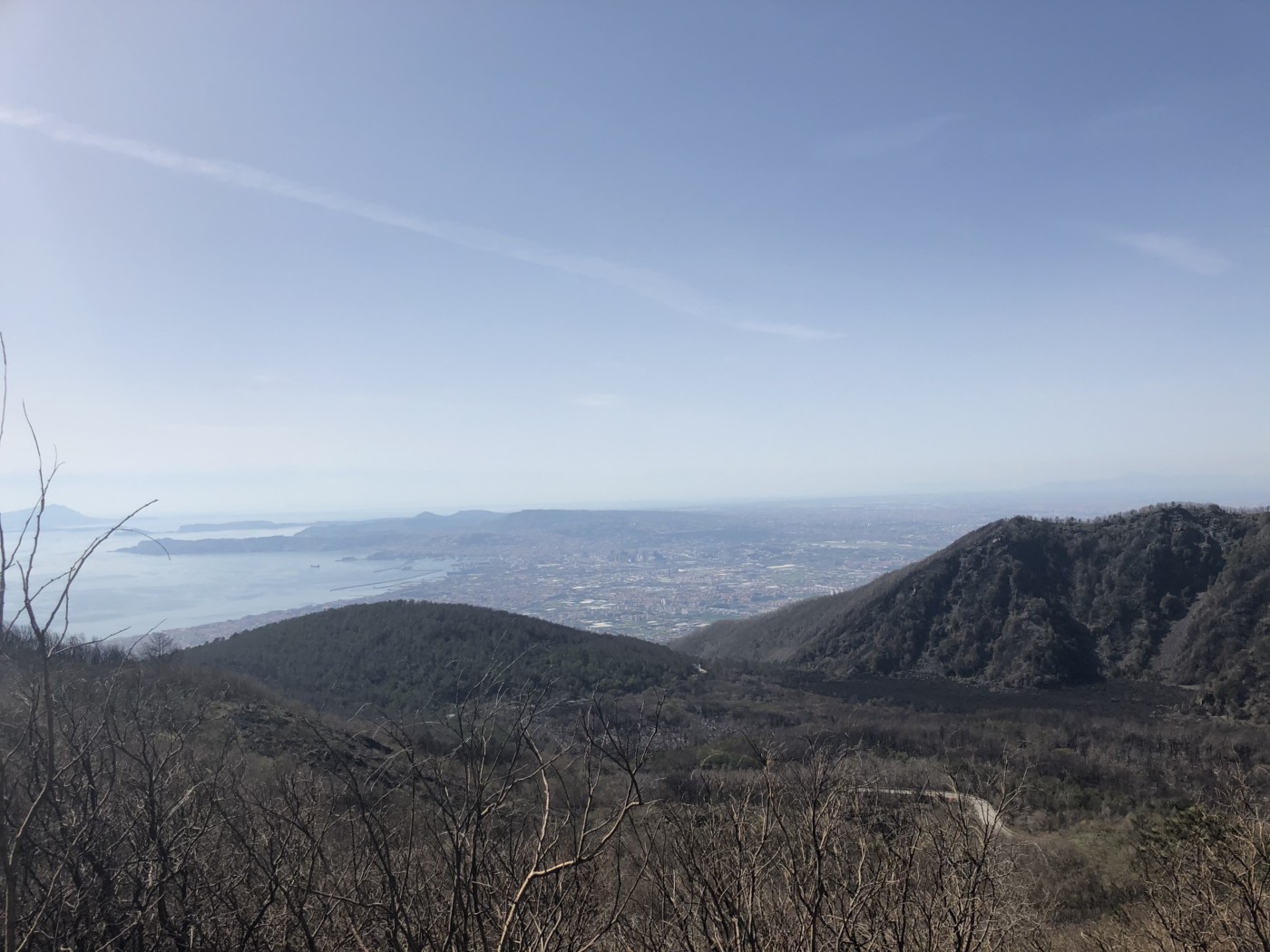 When you get off the train at Pompeii, there will be buses there to take you up to visit Vesuvius. There will be a man outside trying to get you to buy a Mount Vesuvius ticket, but that is for something else. If you are paying for the bus, you will do so on the bus. The tickets are a little less than $5 — but be aware that is each way, and you will need to be prepared with cash.

Also be prepared for the bus to be absolutely terrifying. It is a large bus trying to climb a mountain with very narrow roads. And when another bus is coming down the hill, sometimes you don’t think they will both fit. But just know they do this multiple times a day, and are pretty good at it.

You will be given options for a return time to Pompeii, but just remember at the end of the day they come less often and you will be competing with more people. They have no problem with making you stand.

Time: This trip from Pompeii to Mt. Vesuvius on this bus takes nearly an hour, so plan your day accordingly. Plan for a minimum of 90 minutes to climb Vesuvius and back down. 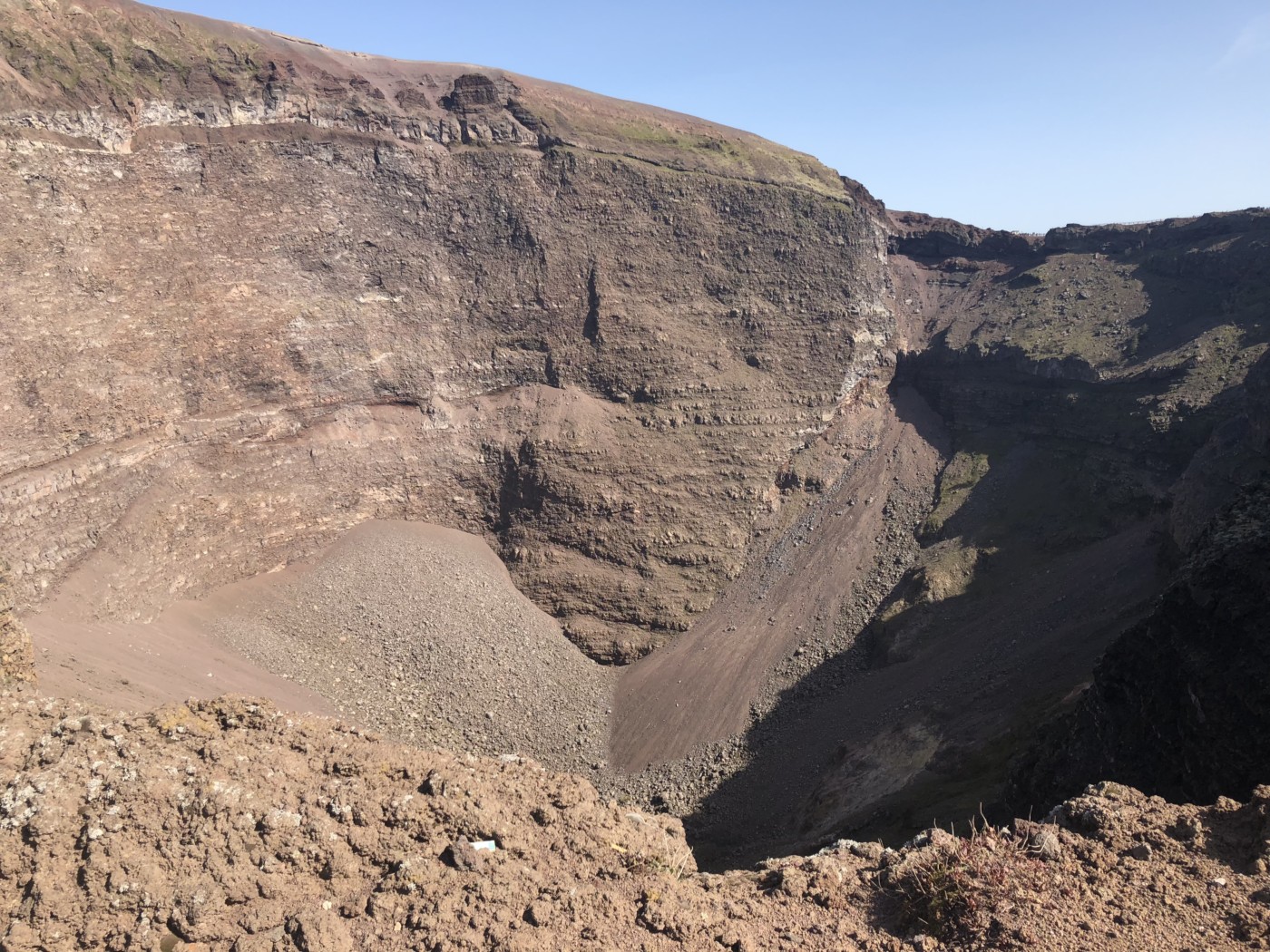 Before I made the trip of Mount Vesuvius, I read a guide that said that climbing Mount Vesuvius is a quick walk. A walk is not the way to describe it, it’s an actual hike, and is not that easy. That being said, there were older people up there, people with canes, and small children all visiting Mount Vesuvius.

Recommended: Where to find the best pizza in Naples, Italy

The bus will drop you off on Mount Vesuvius, before the path even begins, around 200 meters (or 660 feet) from the summit — but that is measured vertically. Once you are dropped off, you will do a series of switchbacks before you get to the top.

Even though the hike up Mt. Vesuvius is pretty steep, it is completely worth it once you reach the top. You will be able to walk around the crater as well as getting the best views of the surrounding communities and Mediterranean.

There is also a small shop at the top where you can buy smaller items. We ended up getting a bottle of wine from the Pompeii winery, because when are we going to do that again?

Your trip to the city of Pompeii and Mt. Vesuvius will be one of the most enriching you will have in your lifetime. To see an ancient community preserved so fully and so perfectly is something you can’t even get in Rome. We spent a week in Italy, and our trip to Pompeii and Mt. Vesuvius were my favorite, and incredibly life changing. We suggest visiting Pompeii and Mount Vesuvius, even if you spend two days in the area. But give yourself plenty of time for each, because both are such an important part of the history of the area. 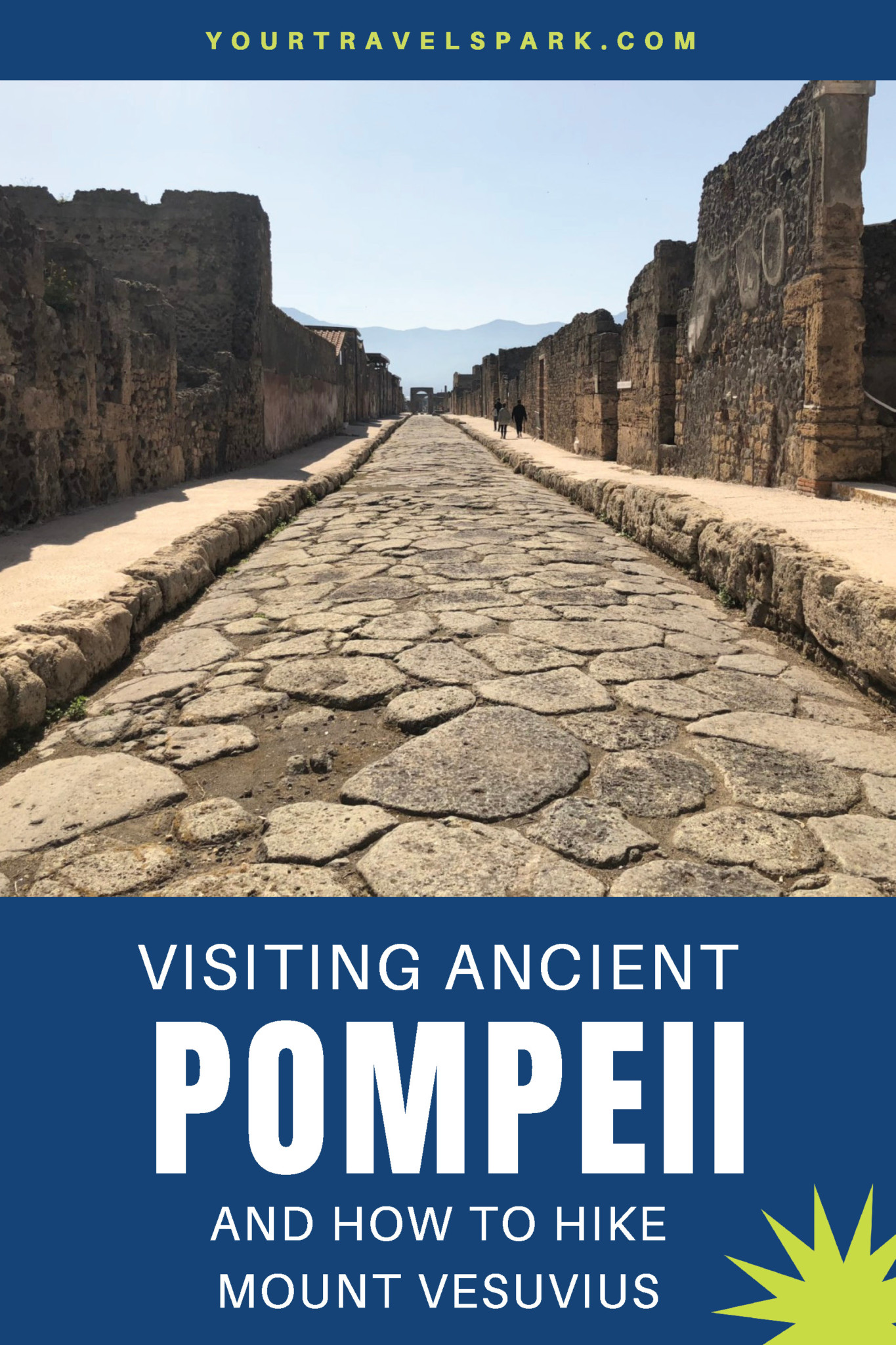 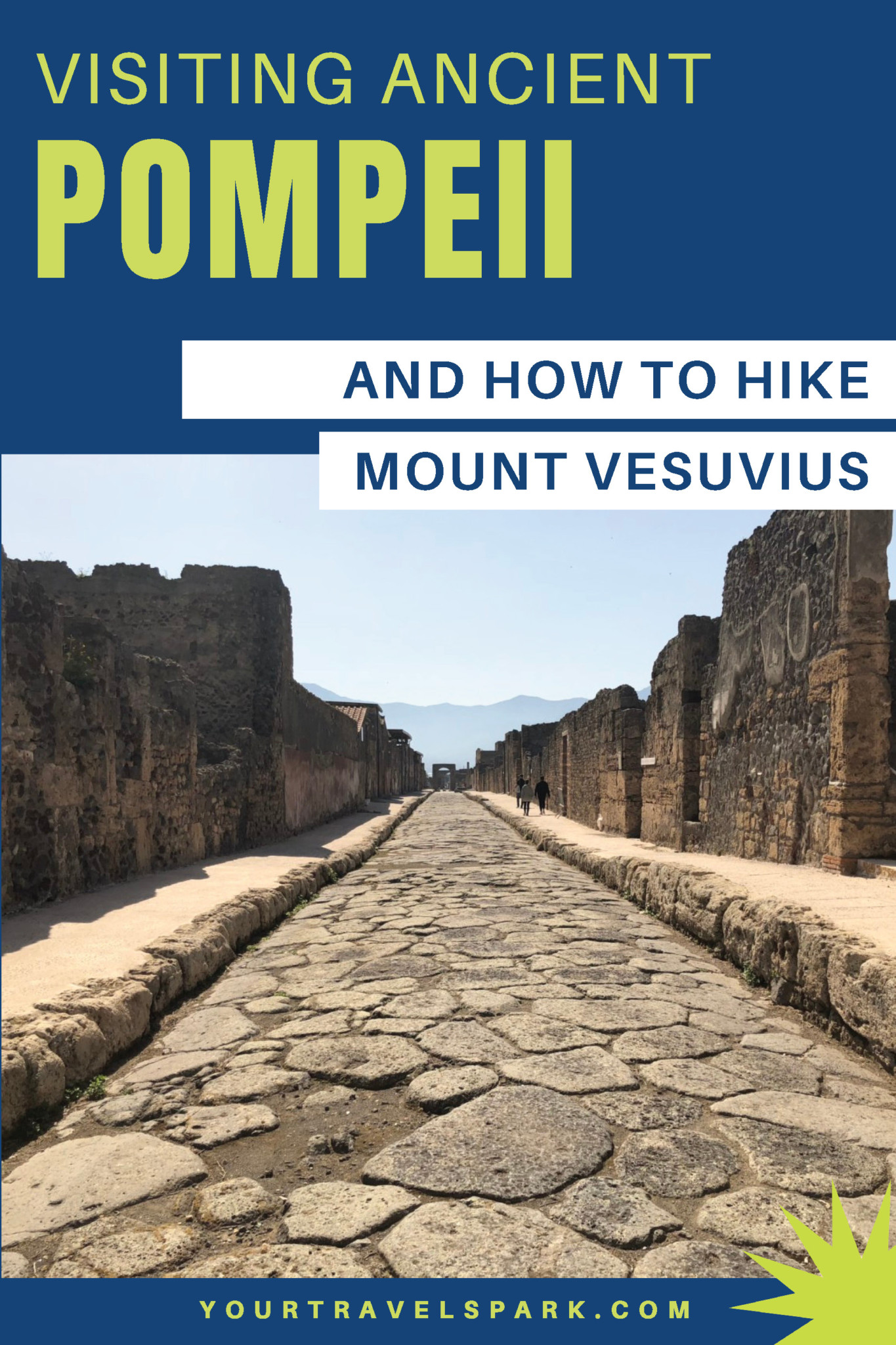 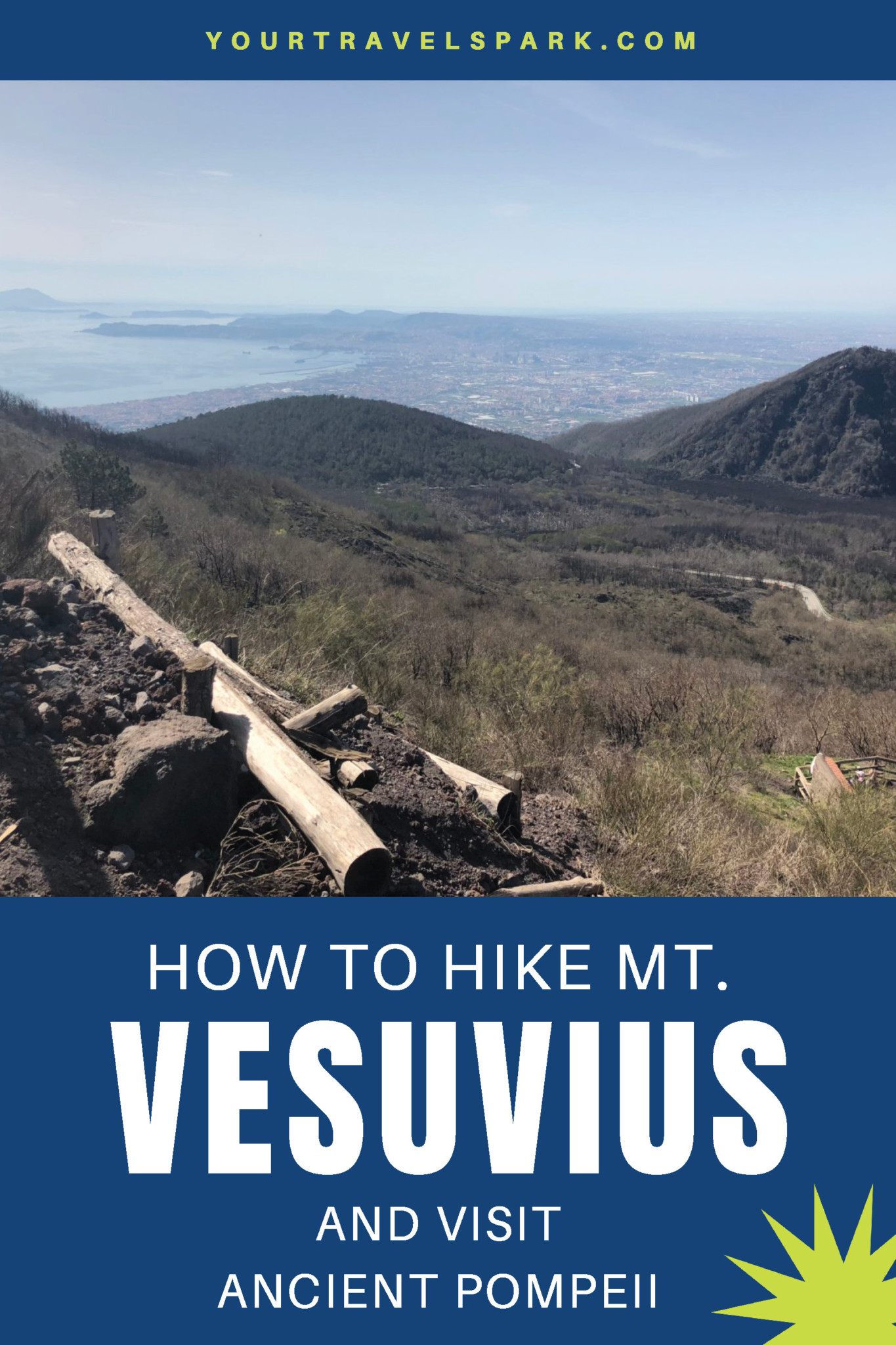 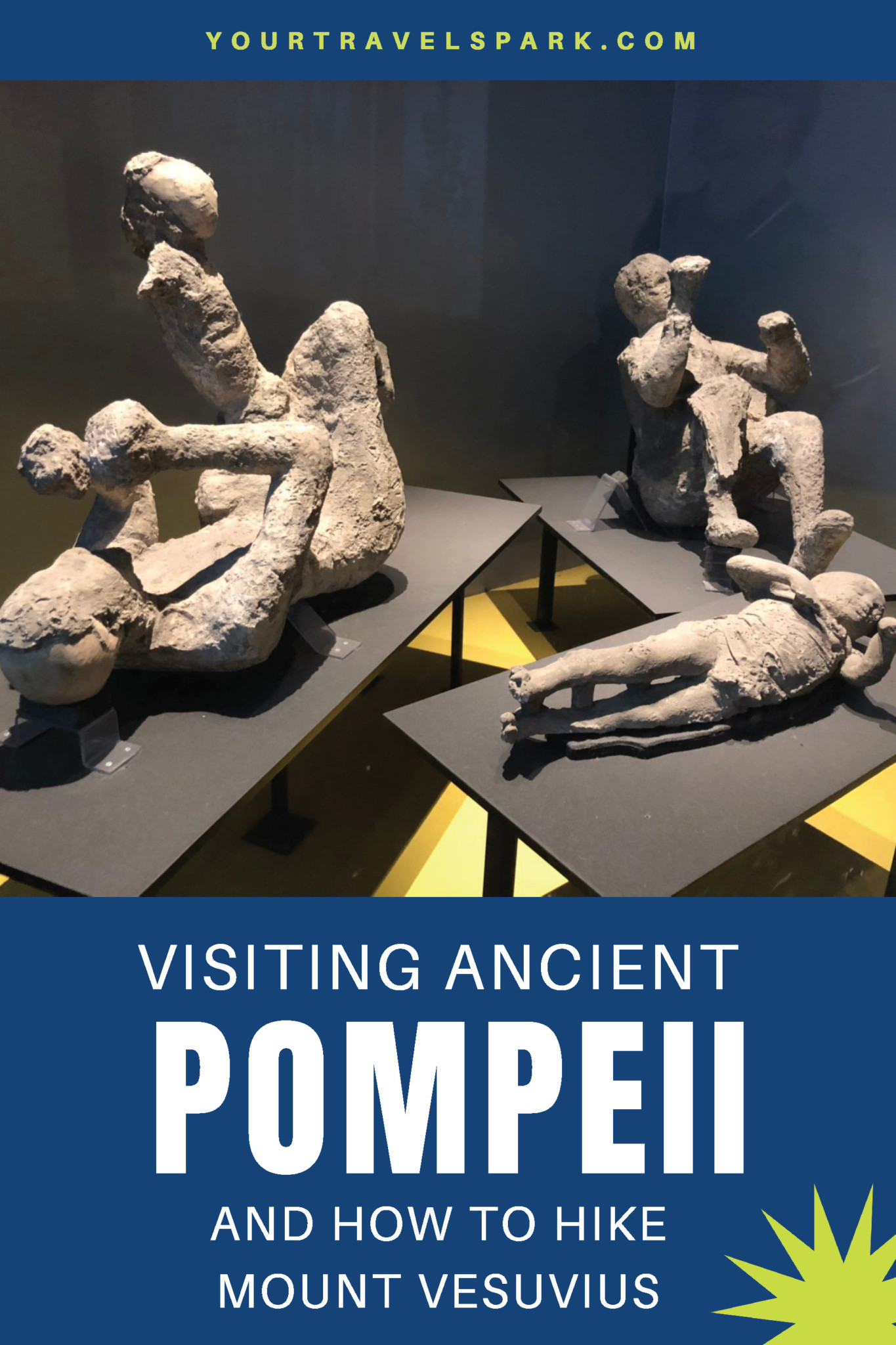 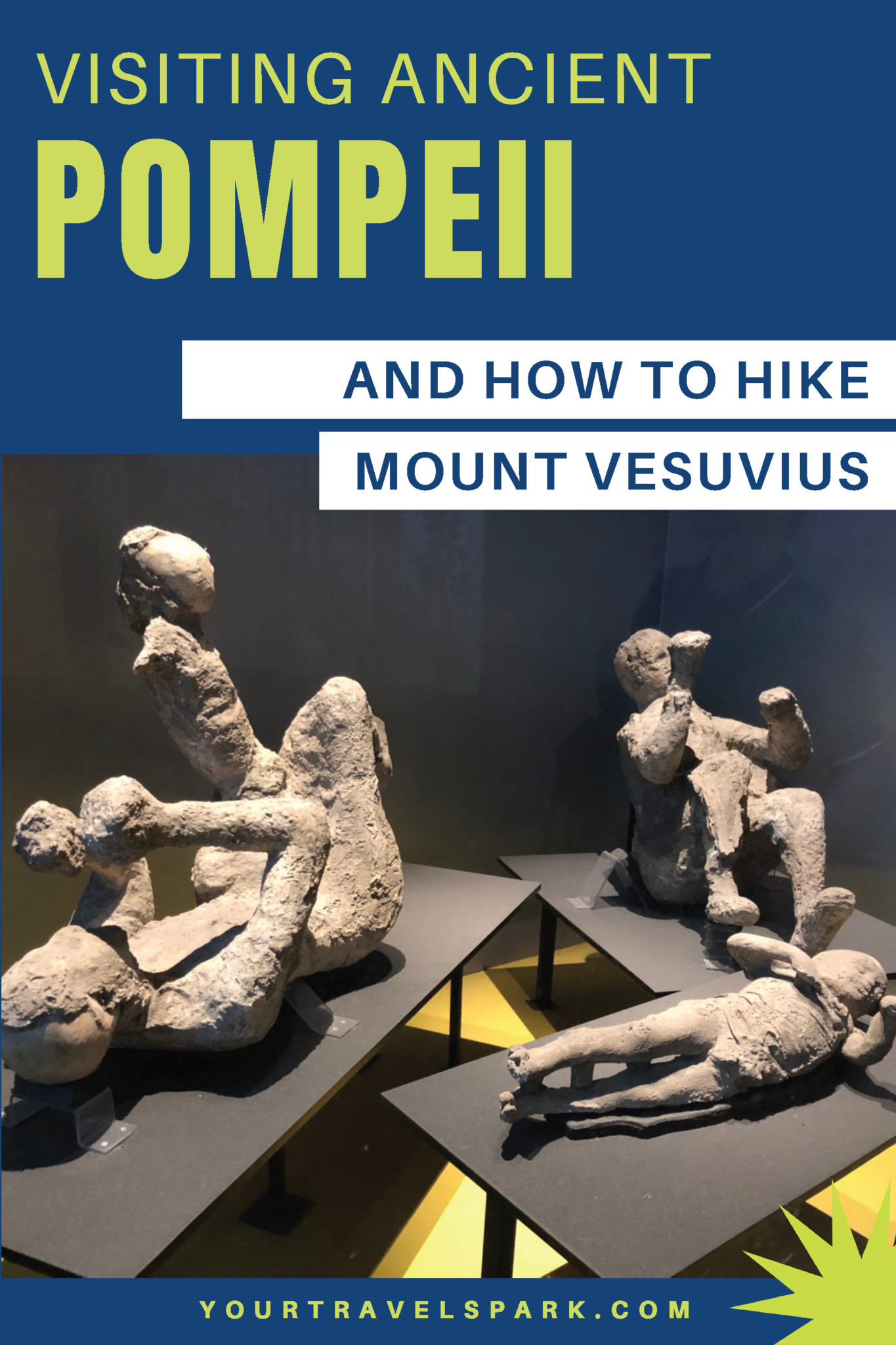 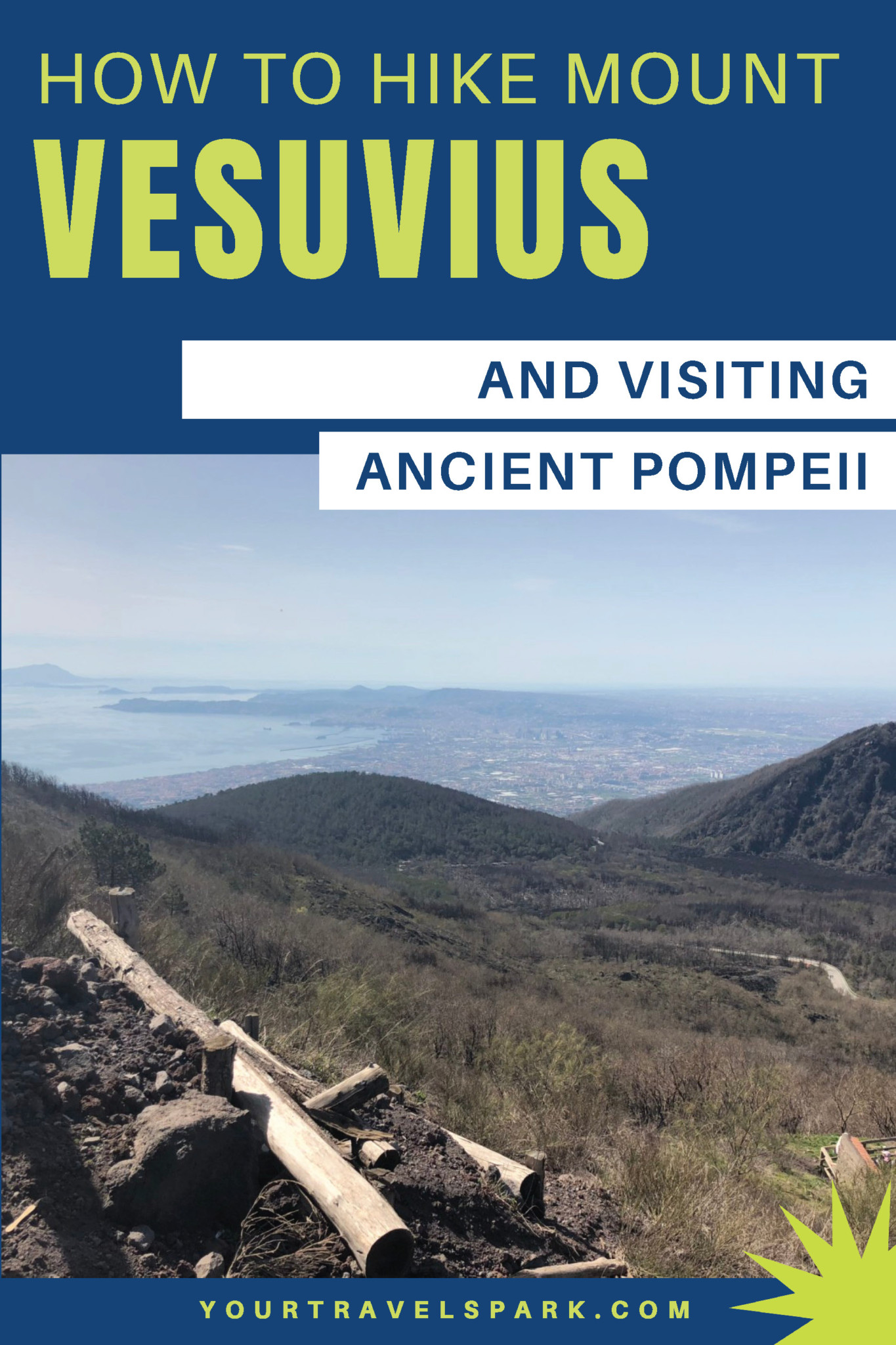